Here's the latest news on Microsoft's rumored mobile-payment platform, and why the company needs to launch it soon.

You mightsoon be able to make in-store purchases through a Microsoft mobile payment system. Source: Microsoft.

Well, it looks as if Microsoft (MSFT -0.92%) might soon to be added to the growing list of companies that are establishing their own mobile payments platform. Ars Technica reported this week that Microsoft has filed for licenses to transmit money in all 50 states and the U.S. territories.

This comes on the heels of Apple's own mobile payment platform launch just a few months ago, as well as recent announcements of payment systems from Samsung and Android. But while those systems have either launched, or soon will, Microsoft's system is still just a rumor.

Here's everything we know about it so far:

1. Microsoft's mobile payment platform might be called "Microsoft Payments." Banking consultant Faisal Khan recently tracked down some information on Microsoft's possible system and found the official money transfer license filing for "Microsoft Payments," I've included my own screenshot below from the Nationwide Mortgage Licensing System & Registry, also known as the Nationwide Multistate Licensing System. (Yes, the NMLS literally has two names. It should really do something about that.) 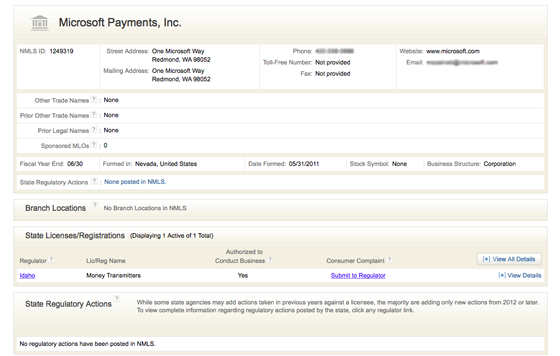 2. Microsoft already has cleared some official hurdles. The company has already filed the official paperwork to be a money transmitter in the U.S. and some of its territories. Microsoft has also submitted a form to be a money services businesses. This sounds pretty official, right?

3. One state has already given Microsoft the go-ahead. Idaho was the first state to grant Microsoft permission to act as a money transmitter. Idaho, you're so tech savvy!

4. Windows 10 for mobile will be capable of handling payments. Microsoft's newest OS for its phones will include host card emulators, or HCEs, which are used in tandem with near-field communication, or NFC, to make mobile payments. The HCEs are the secure element of the credit card transaction. As Windows Central pointed out, Windows 10 for mobile won't require any secure SIMs from carriers, which means users can be on any network and employ the rumored payments systems.

5. Windows 10 "tap to pair" could be used for payments. At the company's WinHEC 2015 conference last month, Microsoft said Windows 10 for mobile will have a "tap to pair" feature allowing a smartphone to easily pair with things like a large display monitor, via NFC. This same tech could easily be used for a tap-to-pay feature in mobile devices.

Why Microsoft needs this
Apple's new in-store mobile payment system has already been released to the public and works on the iPhone 6, 6 Plus, and Apple Watch. Meanwhile Samsung Pay will debut later this summer. The two companies are trying to lock customers into their opposing ecosystems. As I pointed out in an earlier article, each payment system has its benefits.

If that weren't enough, a group of retailers have created its own mobile payments platform, called CurrentC, to take on Apple Pay and Samsung Pay. The technology was created by the Merchant Customer Exchange, and its members include Rite Aid, CVS, Wal-Mart, Best Buy, and others. You might remember that Rite Aid and CVS stopped allowing Apple Pay payments just a week after its launch, hinting that retailers were eager to take their own mobile payment route. CurrentC will officially launch later this year, likely around the same time as Samsung Pay.

At this point, Microsoft needs to launch its own payments platform, if only because everyone else is doing it (peer pressure can be a good thing). Microsoft already falls far short of Samsung's and Apple's smartphone prowess, and the company can't give potential smartphone customers any more reasons not to choose a Windows mobile device. With Apple and Samsung already well on their way in the mobile payments space, Microsoft needs to jump on this opportunity now before it falls even further behind.

Chris Neiger has no position in any stocks mentioned. The Motley Fool recommends Apple and CVS Health. The Motley Fool owns shares of Apple. Try any of our Foolish newsletter services free for 30 days. We Fools may not all hold the same opinions, but we all believe that considering a diverse range of insights makes us better investors. The Motley Fool has a disclosure policy.