If you're a Costco (NASDAQ:COST) shopper, then you can probably name the single most consistently awesome deal in the warehouse. Of course, I'm talking about the hot dog and soda combo that costs the same $1.50 that the retailer first charged for it back in 1985.

Just as that one piece of knowledge can inform your lunchtime choice, a few key facts about Costco's business can help you make smart investment decisions regarding the stock. With that in mind, here are three things investors absolutely need to know about this warehouse giant.

1. Costco is growing faster because its customers are happier.
Costco is outgrowing its rivals by leaps and bounds right now. The company booked an 8% comparable-store sales bounce for the first half of fiscal 2015. In contrast, Wal-Mart's Sam's Club posted 2% growth recently, and Target managed just a 4% gain. The only company to come close to Costco's growth pace is Kroger, which engineered 6% comps in the last quarter of 2014.

The key to that impressive outperformance is Costco's delighted membership base. The retailer frequently dominates customer satisfaction surveys, including this year's ACSI poll, which put it on top of all specialty retailers with an 84 score out of 100.

Costco's membership renewal rate is another critical data point to watch regarding customer satisfaction. The news is great for the business there: The percentage of renewing members ticked higher by a full point last year to reach an astounding 91%.

2. Selling stuff is just a side business.
That helps explain why Costco isn't as much a retailer that's selling stuff as it is a club that's selling memberships. Consider this: Costco booked $110 billion in sales last year but grossed just $12 billion in operating profit. That 11% margin is embarrassingly small when directly compared to rivals: Target, Kroger, Wal-Mart, and Amazon all boast operating margins between 20% and 30% of sales.

But the key difference is Costco's membership fees. Those add a steady $2 billion directly to its bottom line. In fact, membership income accounts for more than three-quarters of the company's operating income each and every year. That makes Costco's earnings more predictable, more dependable, and thus of higher quality than your average retailer's.

3. The stock has earned a rich premium.
Because of points one and two, it makes sense that Costco's stock would be valued at a big premium to its rivals. Investors are paying 29 times earnings for this membership business, compared to 22 times for high-performing Kroger, or 16 times for struggling Wal-Mart.

The bad news for prospective shareholders is that the stock price premium has been consistent through the years. Costco's P/E ratio rarely drops much below 20, even during the Great Recession. 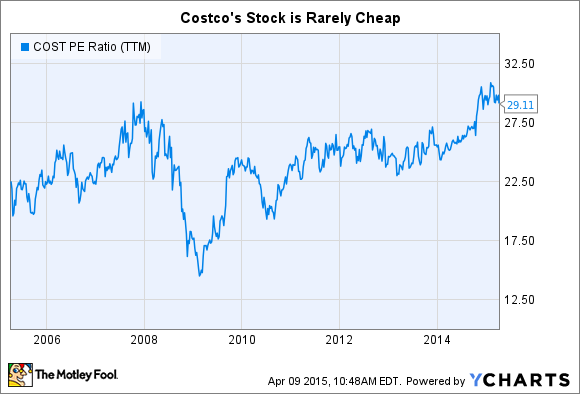 That's why keeping Costco on your watchlist isn't likely to help you snag a much better share price. Instead, my view is that investors keen on owning this business should take some time to build up a position, and not worry so much about paying too high a price for this stellar company. In a few years, the stock will probably be just as richly priced as it is now. And the hot dog lunch will be even more of a ridiculous steal.