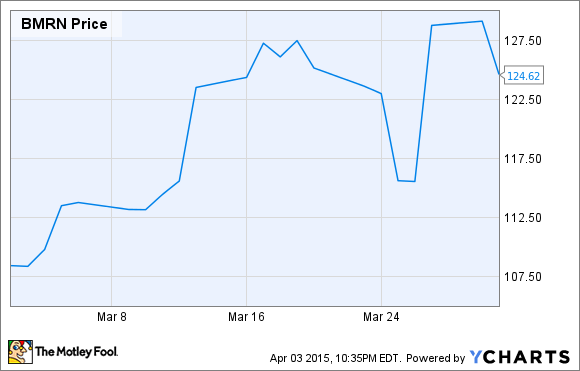 What: Shares of BioMarin Pharmaceutical (NASDAQ:BMRN), a biopharmaceutical company focused on developing drugs to treat rare and ultra-rare diseases, soared 16% in March, according to data from S&P Capital IQ, after receiving positive commentary from investment banking firm Deutsche Bank.

So what: According to well-respected analyst Robyn Karnauskas at Deutsche Bank, BioMarin shares have plenty of room to head higher, either because of catalysts inherent within its own developing pipeline, or as a merger/acquisition target.

Karnauskas specifically wrote in her note to investors that "If there is pipeline success, we think [a merger and acquisition] premium will go into the stock in [2016]. We currently see a potential takeout at $170 a share." If right, Karnauskas' prognostication works out to nearly 40% upside from where BioMarin ended March.

Additionally, Karnauskas believes that BioMarin could reach $219 per share if just some of BioMarin's key pipeline products are successful. Specifically mentioned were BMN-111 for achondroplasia, BMN-270 for hemophilia A, and drisapersen, a potential Duchenne muscular dystrophy treatment that BioMarin inherited when it purchased Prosensa. In what's referred to as a "blue-skies scenario," where everything in BioMarin's pipeline is successful, Karnauskas believes BioMarin could be worth anywhere from $308 to $418 per share, a tremendous leap from today's share price of $123. Now what: What investors need to ask themselves after BioMarin's monster run higher in March is whether or not this currently $20 billion market cap company deserves a valuation of $27 billion -- or higher based on Karnauskas' suggested M&A price.

On one hand, BioMarin's business model of focusing on ultra-rare and rare diseases should minimize competition, afford it a long opportunity to stay on pharmacy shelves with high margins, and should all but assure that insurers latch on with coverage. Focusing on rare diseases has been a successful strategy for Alexion Pharmaceuticals, and it looks as if BioMarin will follow in its footsteps.

On the other hand, BioMarin looks like a hot air balloon when you examine its bottom-line. Biopharmaceutical companies with deep pipelines are often given some slack when it comes to losing money because of high research costs. However, its current valuation of nearly $20 billion should give even the most risk-tolerant investors some pause, considering that BioMarin is slated to lose money through 2017. It could be four or five years from now before BioMarin's forward P/E even falls below 100!

While I could certainly see the allure of BioMarin from the perspective of Big Pharma, I don't personally view the company as having much room for upside short of a buyout, which is itself no guarantee. Before investing in BioMarin I'd want to see an additional drug or two make it to market, and I'd really prefer to see BioMarin narrowing its cash burn and lessening its annual losses.