What: It was an awful March for investors of BreitBurn Energy Partners L.P (OTC:BBEPQ). The company's units, as we can see on the chart below, were down 25% for the month. 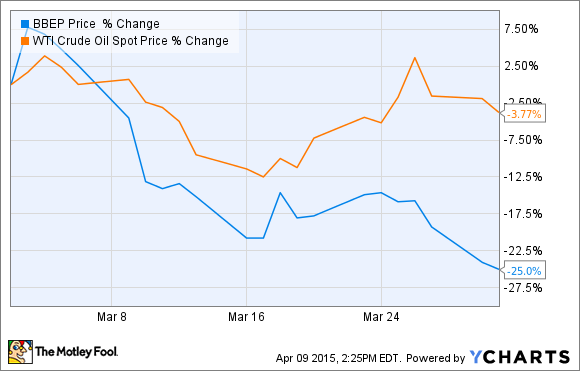 This sell-off actually had nothing to do with oil prices, which were rather tame last month, only falling about 4%. Instead, BreitBurn's units were reacting to several disappointing news items, as the company reported weak fourth-quarter results, took a $1 billion lifeline from private equity, cut its distribution by 50% again, and was downgraded to a sell by a formerly bullish analyst.

So what: The biggest factor behind the company's weak showing in March was the fact that BreitBurn was running up against a deadline for its debt. The company had borrowed $2.2 billion of the $2.5 billion available on its credit facility, which was due to be redetermined by its banks in April. Investors were gravely worried that banks would redetermine its borrowing base below its outstanding amount, leaving the company to scramble for cash. That was worrisome, because the company already pulled back a debt offering late last year after it didn't like the terms the market was offering on the debt.

This situation is what led to it taking a billion-dollar investment from private equity firm EIG Global Energy Partners in late March. Under the terms of that deal, BreitBurn sold debt and equity to the P-E firm, and cut its distribution by 50% for the second time this year. While that helped solve the near-term liquidity issue from the looming bank determination, BreitBurn's credit facility is still tight, as it has borrowed 70% of the new capacity, which isn't all that much better than the 88% it had drawn before the recapitalization.

Now what: BreitBurn is still in a tight spot. Even after the recapitalization, its leverage ratio is expected to be 4.8 times in 2015, which is above its peer average of 4.1 times. This suggests that the company still has a lot of work to do if oil prices don't meaningfully rebound this year. That said, if oil prices do rally, BreitBurn units will follow suit.