What: Shares in OvaScience (NASDAQ: OVAS) rallied by 10% earlier today after the company reported insider buying by its co-founder Richard Aldrich.

So What: OvaScience issued a filing with the SEC yesterday disclosing that firm founder Richard Aldrich had acquired 2,500 shares at a price of $29.97 per share.

Aldrich's buy comes after a sharp sell-off in OvaScience shares following an industry conference at the end of March. 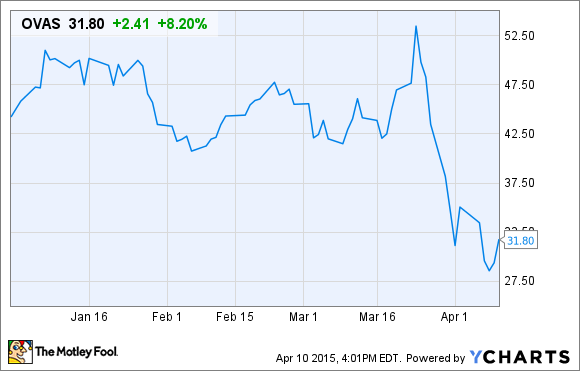 As shares have fallen, industry analysts have defended shares in the company by reiterating their buy recommendations and blaming the sell-off on investors misinterpreting data that was generally encouraging for the company's in-vitro enhancing solution, Augment.

Last year, OvaScience began offering Augment at various international centers as part of a trial run, and the company is rolling Augment out commercially at those centers this year. The company is also developing additional in-vitro solutions including OvaPrime to boost women's egg reserves and OvaTure, an IVF solution that aims to reduce or remove the need of hormone injections.

Now What:  OvaScience is attempting to tap into a growing market for in-vitro fertilization by improving in-vitro success rates. The in vitro market is an attractive commercial market; however, OvaScience is still in the early stages of commercialization, with no material revenue. As a result, OvaScience is a high risk company best suited for speculative investors.