Automaker Toyota Motor Corp (NYSE: TM) disrupted the automotive industry when it developed a lean manufacturing process known as the Toyota Production System. It's a system that focuses on eliminating waste within a manufacturing process, and for Toyota, it meant it could make its cars cheaper and more efficiently than its American rivals. That enabled the automaker to rise from relative obscurity to become one of the world's largest automakers.

That process could also be the key to help oil drillers survive the currently weak price of oil. By deploying a similar lean manufacturing process for new wells, oil drillers like Hess Corp (NYSE: HES) are shaving hundreds of thousands of dollars off their well costs in places like the Bakken Shale of North Dakota. In fact, in just the past eight months, Hess has cut its well costs in North Dakota by $400,000 per well alone, even as it drills longer laterals on its wells and uses more sand to frack each well. By using this process, the company believes it can continue to profitably drill even at a $40 oil price.

Hess is mirroring the Toyota approach by focusing on its company culture. It's building a culture of relentless focus on cost and efficiency. And it's working. As we can see in the following chart, the company's operations in the Bakken have gotten better each and every year. 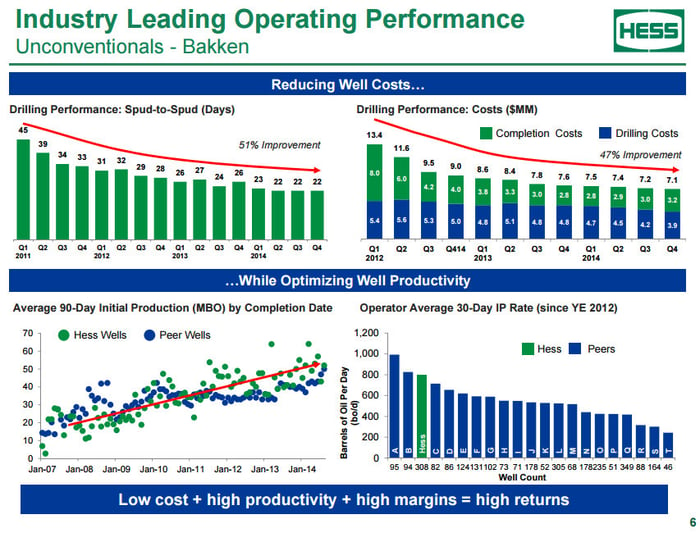 As we can see on that slide, the company has enjoyed remarkable improvements in its drilling operations. Hess is drilling wells almost twice as fast now, as its spud-to-spud days, which are the days between starting and completing a well by a rig, are down 51% since 2011. This is leading to dramatically reduced well costs, which are down 47% since 2012. Best of all, the company isn't just drilling wells cheaper and quicker, but it's drilling better-quality wells, as Hess' production rates are at the high end of its peer average. This is leading to better returns, even at the currently weak oil price.

Hess also continues to push its vendors and contractors like oil-field service companies to improve their efficiency and cut costs so its returns improve. The company's employees also tracked what was working and what wasn't, which is why the company switched from using expensive ceramic proppants to simply using more sand in the fracking process, as that was a much more cost-effective solution. Despite all this progress, Hess believes it has barely scratched the surface of its potential in driving returns from the Bakken.

Continual improvement
Other producers in the Bakken are following similar processes to get their costs down in order to remain profitable at lower oil prices. Whiting Petroleum (NYSE:WLL), for example, is "rigging the company" to run on $45-$55 oil, according to CEO Jim Volker. Like Hess, it continues to drive its well costs lower by using better technology and better processes to continue growing amid weaker oil prices.

Meanwhile, Continental Resources (NYSE:CLR) is pushing to reduce its own costs by holding out for better deals from service companies. The company has joined others in the industry by drilling, but not completing wells until service costs come down. In so doing, the company expects its service costs to decline 15% by mid-year, and at least 20% by year-end. Those reductions, along with 5%-10% cycle time improvements by year-end, are how Continental expects to boost its own returns and enable it to drive solid growth and returns at current oil prices.

Investor takeaway
Oil companies are quickly becoming well-oiled (pun intended) machines when it comes to drilling shale wells. By taking a page out of Toyota's lean manufacturing process, these companies are cutting costs and boosting returns. These efficiency gains could potentially enable these companies to thrive at $40 oil, which is something that -- at one time -- was thought to be a worst-case oil price scenario for American oil companies.