In 1997, Apple Inc (NASDAQ:AAPL) was nearly bankrupt. In fact, had it not been for a $150 million investment that year from Microsoft -- worried it could be viewed as a monopoly without competition from the folks in Cupertino -- Apple likely would have never had the chance to build upon success after success to become the tech behemoth it is today.

The world may have never seen Apple change the face of music with the iPod and iTunes in 2001. Or alter the smartphone landscape with the first-gen iPhone in 2007. Or disrupt the industry again with the first iPad in 2010.

Now here we are, 18 years later, and Apple just became the latest member of the Dow Jones Industrial Average. It's the most valuable publicly traded company in the world by a long shot. For perspective, with its market capitalization at $737 billion as of this writing, Apple is more than twice as large as Microsoft ($339 billion), almost three times as big as Wal-Mart ($261 billion), and more than four times the value of Samsung Electronics ($188 billion).

At the end of its most recent quarter, Apple's $178 billion cash hoard was roughly equal to the total market cap of Amazon.com. Considering that represented a $22.7 billion sequential increase over the previous quarter, you can bet Apple has grown even richer since then thanks to sustained strength in iPhone sales. And Apple started taking pre-orders online for Apple Watch on Friday, only to see its latest device defy skeptics by selling out all available launch stock within minutes.

The bigger they are...
But that begs the question: What would it take to kill Apple -- or at the very least, to bring it back to its unenviable situation in 1997?

History is full of examples of fallen business titans. Look at AOL, for example, whose $160 billion+ valuation crumbled in the years after it merged with Time Warner in 2001. Or take RadioShack, which finally filed for bankruptcy two months ago, rendering its stock essentially worthless 16 years after it peaked at nearly $90 per share in 1999.

Or consider BlackBerry (NYSE:BB) -- or, as we all knew it a few short years ago, Research In Motion -- the value of which has fallen more than 95% since not-so-coincidentally peaking the same year Apple announced its first iPhone. As it stands, I think BlackBerry's rise and fall offers the most comparable tale of caution for Apple shareholders.

But first, to get a gauge of just how far Apple has come, consider this chart of the two companies' respective market capitalizations during the past decade: 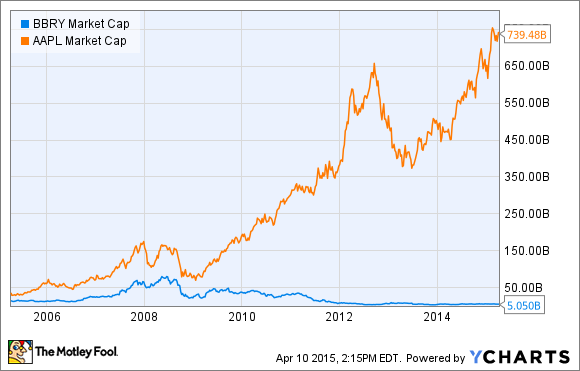 It's obvious, then, Apple's influence extends much further than the still-impressive scope BlackBerry enjoyed in its hayday, which would make Apple's fall only that much more impressive.

So what was BlackBerry's critical mistake? First and foremost, BlackBerry consistently underestimated the possibility Apple could disrupt its core business.

In early 1997, BlackBerry's then co-CEO Jim Balsillie mused of the iPhone, "It's kind of one more entrant into an already very busy space with lots of choice for consumers. [...] But in terms of a sort of a sea-change for BlackBerry, I would think that's overstating it."

Later that year, BlackBerry co-founder Mike Lazaridis added, "Try typing a web key on a touchscreen on an Apple iPhone, that's a real challenge. You cannot see what you type."

One disruptive threat
As it stands for Apple, one potential threat along these lines is up-and-coming Chinese smartphone maker Xiaomi. Xiaomi went from a small start-up in 2010 to China's leading smartphone vendor by the end of 2014, thanks in large part to its propensity for offering devices with premium specifications at affordable prices.

Though some might argue Apple's premium positioning means Xiaomi is a bigger threat to fellow Android smartphone makers like Samsung, make no mistake: Xiaomi has Apple in its sights. Case in point: This recent Xiaomi ad hilariously highlights its own sleek engineering efforts in the MINote smartphone by poking fun at iPhone 6's protruding lens:

To Apple's credit, recent market research from Kantar Worldpanel showed that, as of February 2015, strong demand for the iPhone 6 and 6 Plus helped Apple's market share in China rise 9.7 percentage points, to 27.6%, marking the first time Apple has exceeded Xaiomi on the metric.

But Xiaomi isn't sitting on its hands as Apple takes share: On Thursday, the company announced it just sold 2.11 million handsets in a 12-hour online sale on Wednesday, setting a new Guinness World Record for the most mobile phones sold on a single online platform during a 24-hour period.

Of course, those 2.11 million handsets "only" gathered $335 million in sales, good for an average selling price just above $158. By comparision, Apple's iPhone ASP came in at a record $687 last quarter.  But even as Apple's cash continues to pile up, it can't ignore the risks of merely having a viable competitor willing to sacrifice the very margins that make Apple's business model so attractive.

If that wasn't enough, Xiaomi is intent on spreading its influence. Earlier this year, for example, Xiaomi unveiled a line of sensor kits to enable smart homes -- a seemingly direct shot at the HomeKit software platform unveiled by Apple last year.

Never say never
Because they arguably serve two distinct corners of the market, perhaps there's plenty of room for companies like Apple and Xiaomi to peacefully coexist. With each passing quarter of success, there's no doubt it will be more difficult to supplant the growing ecosystem Apple continues to build.

But if one thing is sure in the end, it's that as long as Apple's prowess endures, there will always be competitors aiming to derail it. More than likely, then, is the possibility of some yet-to-be-known tech innovator rising from obscurity and taking the world by storm. If Apple fails to take such threats seriously over the long term, it could find itself right back where it started 18 years ago.

What Would It Take to Kill Apple Inc.? @themotleyfool #stocks $AAPL $BB Next Article
Current