To double installations year after year, SolarCity (NASDAQ:SCTY.DL) has had to do more than just track the industry's growth. It has had to take market share from competitors, something it has done at a rapid rate in the last few years. In 2012, SolarCity had a 16% share of solar installations, which grew to 26% in 2013, and 34% in 2014. That led to the hockey-stick growth you see below.

But with such a large share of the market, will SolarCity see market share slip in 2015 as it is now the competitor to beat in the solar industry? 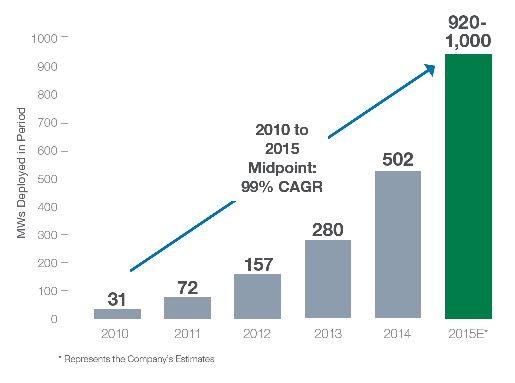 All eyes are on SolarCity
In 2015, the company's biggest challenge may be from companies large and small who are investing in the residential solar market. The success SolarCity has had, both in the solar industry and on the stock market, hasn't gone unnoticed and won't be unchallenged in coming years. 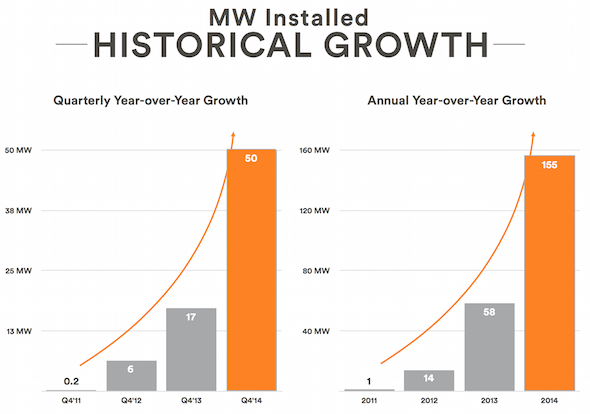 Vivint Solar (NYSE:VSLR) has made the biggest dent in the market in recent years. It wasn't even in business until late in 2011, and its market share grew quickly -- to 8% in 2013 and 13% in 2014. In fact, Vivint Solar is actually growing faster than SolarCity, and it's encroaching on SolarCity's home territory in California.

SunPower (NASDAQ:SPWR) has had its fingers in the residential solar market for years, and in 2014, it accounted for about 13% of the U.S. market. But it's been sold out of solar panels for over a year, meaning it was allocating its panels among countries around the world and to large, utility-scale projects. Now that it's completing a 350 MW capacity expansion in the Philippines, it's putting weight into the residential market in the U.S. and could increase its share in both residential and commercial projects as a result.

Sunrun has historically been one of the largest solar finance companies, but after buying REC Solar's residential business, it's already the fourth-largest installer in the country as well. I'd expect it to grow from 2% share in 2014 to become a bigger player in 2015. This could even be an IPO to watch later this year.

The other major company to watch is NRG Energy (NYSE:NRG) and its residential solar business. NRG Home Solar is trying to leverage its large utility reach as well as products like Goal Zero consumer solar products. With a balance sheet larger than any other solar company, this will be a company to watch throughout the year.

SolarCity's lead isn't as big as you may think
We know competitors are coming, and they'll be a bigger challenge than the ragtag group of small installers who do 46% of residential solar installations. But large companies investing millions in solar growth will also be more desperate to gain market share. That could mean competition on pricing. When it's easy to get apples-to-apples price quotes from multiple competitors, it's also easy to pick the one with the lowest cost.

On this front, SolarCity has the advantage of having the lowest costs in the industry -- at $2.86 per watt -- but others aren't far behind. Vivint Solar's costs were $2.96 in the fourth quarter, and they declined 30% in 2014 alone.

We don't know what Sunrun or NRG Energy's cost structures look like, but Vivint Solar has shown that there's nothing holding anyone back from approaching SolarCity's cost structure in a very short amount of time. SunPower, on the other hand, may cost more than most other competitors, but it's playing in a slightly different market, targeting high-end consumers who are willing to pay a premium for the industry's highest efficiency.

The good and bad coming in 2015
While I expect competitors to get stronger in 2015, I think the companies who will lose share are the small installers who don't have the financial backing or sales force to compete with larger installers. Remember that SolarCity and Vivint Solar together controlled 47% of the residential solar market in 2014, and the top five controlled 54%, so there's still a lot of growth potential for big companies.

That's why I don't think SolarCity will actually step back in market share quite yet. To put some figures to that guess, SolarCity is expecting to nearly double installations to 920 MW-1 GW of solar in 2015, and while that includes commercial solar, I think they'll still be able to outgrow the market in 2015.

GTM Research is expecting U.S. residential and commercial solar installations to grow 46% in 2015, so SolarCity should easily outpace that, gaining share in the process.

What could be a struggle is the pressure competitors bring in pricing. SolarCity is so focused on growth that it may give up profits to hit its growth targets, something we're already seeing evidence of. In the past three quarters, retained value per watt for leases has fallen from $2.32 to $1.72 to $1.69. That's a sign of increased competition and a shift to lower-margin commercial projects.

2015 will be an interesting year for SolarCity, and while it might gain market share, it could be at the expense of long-term margins. That's not a shock in an increasingly competitive space, and it's something investors should expect to be a long-term trend for SolarCity and other installers as well.