Entertainment has never been easier to come by. It's also becoming cheaper and more interesting, all driven by the disruptive powers of digital media and communications.

This topic could easily fill a brick-sized book, but you don't have time for that today. Let me just walk you through a couple of the biggest, baddest, and most disruptive digital entertainment plays on the market. Both of these inventive entertainers are likely to reward investors over the next several years as they leave slow-moving traditionalists far behind.

Captain Obvious presents: Netflix
Netflix (NASDAQ:NFLX) has been ripping up established playbooks since CEO Reed Hastings found a better way to rent movies in 1997. Initially, that involved shipping DVD mailers from a coast-to-coast network of distribution centers, which was good enough to crush both Blockbuster and mom-and-pop video stores.

But that was never the endgame for Hastings. When Netflix filed an S-1 form in preparation for its IPO in May 2002, investors were told to expect even bigger things.

"As technology evolves on the Internet, we intend to use our expertise in personal movie recommendations as a programming guide to Internet delivered video for our users," the filing said.

Today, Netflix streams movies and TV shows to your choice of digital devices, from smartphones and tablets to video game systems and networked TV sets. The all-important DVD service has dwindled to represent just 14% of Netflix's total sales in 2014. Domestic streaming revenue jumped 24% higher last year while the global expansion program drove international sales up by 84%. Netflix hopes to blanket every nation in video streaming by the end of 2016, and the current count of 57 million streaming subscribers should skyrocket as that strategy plays out.

Video streams put your favorite shows and movies in easy reach at all times. With just a couple of clicks on the remote, you can fire up all kinds of classics, new-to-you indie materials, or Netflix originals. Amazon.com (NASDAQ:AMZN) is copying this strategy to some degree, but dilutes the content-hunting experience with marketing to make you buy Blu-ray or pay-per-view versions of the stuff you can't find in the retailer's subscription service.

These two companies are leading a global charge, with dozens of challengers snapping at their heels. Not a fan of the Netflix or Amazon streaming catalogs? If you prefer single-channel collections, plenty of cable channels and prime-time networks are launching their own streaming services. Netflix also sees piracy as one of its biggest competitors, and hopes to beat the scallywags by offering a better experience at reasonable prices.

Taken together, there's no doubt the digital revolution in your living room will continue. DVDs, Blu-rays, and broadcast TV are becoming less relevant by the day as online services rip eyeballs away from the old ways of consuming video entertainment. The future of home entertainment is digital, whether you like it or not. And because the new medium is so much simpler and more flexible, chances are that you'll be OK with that trend.

If you're worried about the competition taking Netflix down, Hastings offered these words of encouragement in the last earnings report: "In general, Internet TV is going mainstream, which both increases the size of the market and brings new competitors. It couldn't be a more exciting time in our industry!"

In other words, a plethora of movie services can expand the total market much faster than a single trailblazer. I think that's correct thinking.

The lines to the classic Space Mountain ride at Disney World are shorter these days, thanks to a creative use of high technology. Image source: Disney.

The big boys can play here, too: Disney
Walt Disney (NYSE:DIS) has embraced the digital future faster than most of its Hollywood rivals.

The company already offers its own digital streaming service, with a separate product for the Disney Channel and another one for premium sports network ESPN. Disney also has a huge distribution agreement in place with Netflix, placing an important chunk of the studio's distribution future in the hands of a leading digital specialist. These moves would be enough to secure a solid place in the early history of next-generation entertainment. But Disney goes the extra mile.

The company is embracing data-driven solutions across its real-world properties, too. The FastPass+ bracelet reduces wait times at Walt Disney World, and often makes it look like the park actually knows what you want.

"Any sufficiently advanced technology is indistinguishable from magic," according to Arthur C. Clarke's third law of prediction.

That's the feeling that Disney is aiming for with the data-soaked and always connected FastPass+ device. Disney World guests using this system will stand in line less, and have more time to spend on shopping and snacks. Happier customers add great word-of-mouth marketing, which is good for future ticket sales.

So Disney is taking advantage of both digital media distribution and data-driven improvements to its theme parks. I expect features in the mold of FastPass+ to reach Disney's other theme parks, cruise ships, and vacation resorts as well, just not quite yet. There are many ways to skin this computer-backed revolution.

What's next?
That's just a tiny taste of the digital disruption happening across every sector of the entertainment industry. You can find dozens more stocks riding this new-wave media wave.

Disney and Netflix are poised to win big thanks to their innovative spirit, paving the way for an industrywide revolution. I own both stocks myself, for that reason and many more.

And here's how Netflix and Disney have treated me over the last five years, compared to the dividend-adjusted returns of the S&P 500 (SNPINDEX:^GSPC). I'm not complaining, and this is really just the beginning of an even stronger surge. "It couldn't be a more exciting time in our industry," and that optimism applies across the entertainment industry as a whole, not just Netflix and its digital media niche. 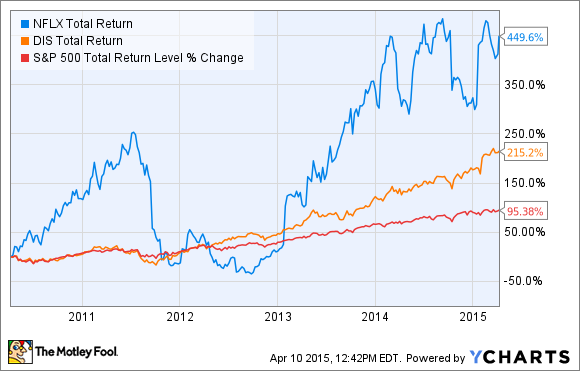