What: Onshore oil and gas drilling services company Basic Energy Services, Inc (OTC:BASX) stock fell more than 10% at one point on April 13, before settling in at about a 7% decline on the day. So far in 2015 the stock is up about 10%, but still down more than 70% from last year's peak in July: 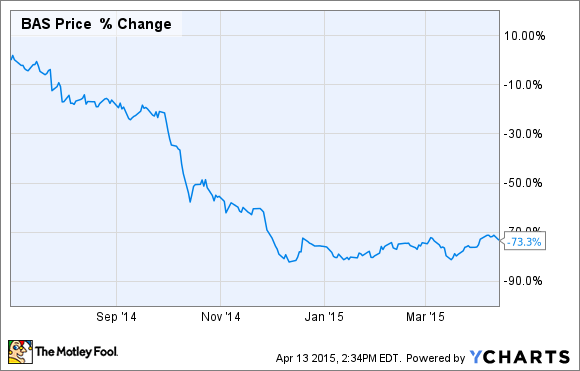 So what: The company released selected operating data for March today, reporting that most of its operating segments are down from last year and sequentially, facing more competition and pricing pressure due to the significant reduction in drilling activity over the past several months. The company reported that it was expecting first quarter revenue to fall 34%-35% from the same quarter last year.

Now what: The worst could be yet to come for Basic Energy Services and its competitors, frankly. While drilling activity has slowed tremendously, well completion -- the last step to putting a well to work producing oil or gas -- has a backlog that could put driller and drilling servicers feeling another big pinch in a few months, once the count of wells to be completed finally catches up to the reduced drilling activity of the past several months.

With that in mind, I don't think Basic Energy Services is a stock worth buying today. The company has almost $1 billion in debt and less than $80 million in cash on hand, putting it in a position to get squeezed even harder in a competitive environment that's likely to worsen before it gets better. There could be upside when drilling activity rebounds, but there's no indication that's happening anytime soon.