What: Shares of Calumet Specialty Products (NASDAQ:CLMT) dropped more than 17% in March. The drop was largely attributed to the announcements of a secondary offering of company shares and the move of CEO William Grube into a newly created job at the company. 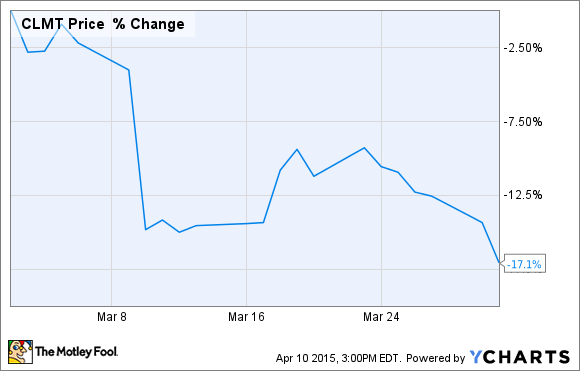 So what: Here is one of the great challenges of owning master limited partnerships such as Calumet. MLPs pays out almost all of--and sometimes more than-- its cash to shareholders. The upside of this policy can be the occasional huge payout, but a major downside is that the company will struggle mightily to retain cash to grow the business.

That forces the company to either issue debt or equity to fund projects, and you can only issue so much debt. Calumet's debt position was getting a little to burdensome, so management decided to pay off some of those debts by issuing new equity in the company.

There is also the question of the impact on the company's future direction of Grube's move from CEO to become Calumet's executive vice chiarman. Grube and the company's co-founder, board Chairman Fred M. Fehsenfeld Jr., will both be on the board and will likely have large influence on where the company goes from here.

Now What: With more equity issued, the company will need to increase its distributable cash flow so it can continue to pay out to shareholders without cutting the payout per share. The company has more than $600 million in expansion and new construction projects under way that will help increase that cash flow, but any hiccups in that plan could be a distribution killer . Despite the miserable month, shares of Claumet Specialty Products have soundly beat the S&P 500 on a total return basis over the last 10 years; if it can execute on its expansion plans without diluting shares too much it should continue to do so.

Editors note: a previous version of this article stated that Calumet Specialty Products was a variable rate master limited partnership. The company pays a fixed rate dfistribution. We apoligize for the error.