Gaming companies in Macau can't seem to catch a break these days. In 2014, a crackdown on corruption in Mainland China caused high rollers to stay home rather than gamble millions of dollars in Macau's casinos.

The result was the sharp decline in gaming revenue that you see below. Now, Macau's own government is reportedly proposing a cap on visitors from Mainland China, which could hurt revenue even more. It could be a punch in the gut, just as Macau's largest operators prepare to open billions of dollars of new casinos. But will things be as bad as they appear? 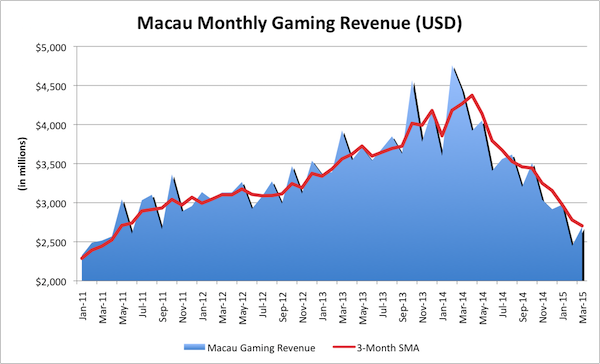 In a way, seeking to improve the revenue from each visitor makes sense; but this cap proposal is also coming at a time when U.S. traded Las Vegas Sands (NYSE:LVS), Melco Crown (NASDAQ:MLCO), MGM Resorts (NYSE:MGM), and Wynn Resorts (NASDAQ:WYNN) are all building new casinos to increase gaming and hotel capacity. Macau could be limiting demand just as supply is increasing.

Macau is a special administrative region of China, so Mainland China's gamblers aren't exactly locals; but the Macau government may be trying to get ahead of China's concerns about increased gambling by Chinese residents. There can be a reputation for corruption, money laundering, and even mob ties in Macau, so telling the Chinese government to limit visitors could get out ahead of more restrictive caps they could put in place.

The desire to focus on foreign gamblers is something we've seen before in Singapore, where there's a fee for locals to enter the casino, and a concern that countries like Korea and Japan have grappled with when discussing new casinos.

There have also been limitations from China in the past, like a limited number of visas to Macau, or limiting the number of times a person can go to Macau in a year. But capping the total number of visits would be a sweeping move that would turn the search to foreign gamblers, something every country is trying to do.

Is this a deal breaker for casinos?
The timing couldn't be worse for gaming companies; but long term, this might not have the negative impact you would think. Twenty-one million visitors from Mainland China is still a lot, and would be in line with 2014's number.

This also could increase the amount of time the average visitor stays in Macau. For decades, Macau has been a day trip for gamblers; but as hotels and entertainment venues are built, they could be enticed to stay a few nights, much like people do in Las Vegas.

Moving to higher-revenue gamblers and foreigners could also create a more diverse and stable base of revenue long term. Macau is trying to become an entertainment hub for the world, attracting conferences, entertainers, and tourists the world over. With that vision in mind, a limit on visitors from Mainland China may not be as bad as you think.

A limit on visitors certainly isn't a good thing for Macau's casinos, but I also don't think it's as bad as it seems at first glance. The proposed restrictions aren't as bad as they appear, and Macau is already pivoting to a more global audience. This could just be another catalyst to force that change in the gaming industry.