Back in January, Qualcomm (QCOM 3.48%) reduced its full-year revenue and earnings forecast after a large, unnamed customer dropped the Snapdragon 810 chip from its smartphones. That customer was later confirmed to be Samsung (NASDAQOTH: SSNLF), the largest smartphone manufacturer in the world.

In its new flagship Galaxy S6 phones, Samsung replaced Qualcomm's chip with its own Exynos 7420, a 64-bit ARM (ARMH) based SoC. Samsung reportedly did this because of overheating issues with Qualcomm's 810 chip in the S5 last year. However, Samsung will continue using Qualcomm chips in many of its non-flagship smartphones.

Looking ahead at the S7, Samsung is expected to replace the Exynos -- which runs on stock ARM Cortex CPU cores -- with its own custom ARM-based design. This would give it tighter control over APIs, functionality, performance, and power efficiency. Apple (AAPL -2.98%) already uses homegrown processor cores with its "A" line of SoCs, while Qualcomm uses its own Krait design for certain SoCs.

Simply put, Samsung is beefing up its semiconductor business as it pulls away from Qualcomm. Let's take a look at how these moves could affect both companies.

Samsung's strategy
Samsung's use of its own SoCs could cut costs and streamline the production process. Samsung's Exynos 7420 also topped both the Snapdragon 810 and Apple's A8 in recent multi-core benchmarks at GeekBench. That robust performance could encourage other OEMs to buy Samsung's SoCs instead of Qualcomm's. Over the past few years, companies like Apple, Lenovo, and Meizu have all used Samsung SoCs at one time or another. 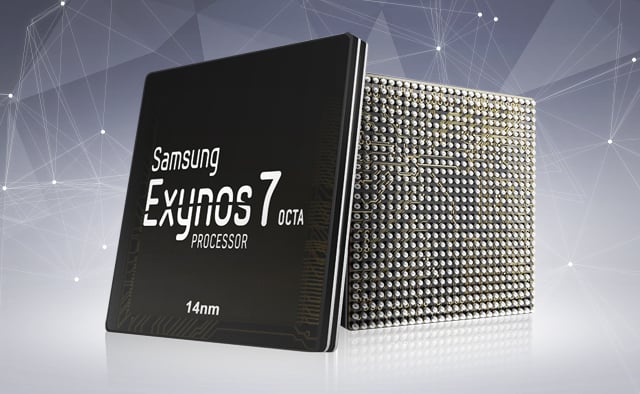 Samsung also has its own foundry, which means it doesn't have to outsource the fabrication process to a third party. Qualcomm, by comparison, is a "fabless" chipmaker that outsources the manufacturing process.

That top-heavy dependence on two major OEMs could cause big problems for Qualcomm. Last month, reports claimed that Apple was planning to boot Qualcomm's wireless modem from variants of an upcoming iPhone. Intel's 7360 LTE modem or Apple's own baseband chips were named as potential replacements. Samsung also replaced Qualcomm's modem with its own Shannon wireless modem in the Galaxy S6. Intel also recently launched 64-bit SoCs with integrated modems, which could lure away other OEMs.

After Samsung booted Snapdragon from the S6, Qualcomm slashed its full-year revenue guidance to a range between $26 billion and $28 billion, down from an earlier forecast of $26.8 billion-$28.8 billion. Qualcomm also revised its full-year EPS to between $4.75-$5.05, down from a prior forecast of $5.05-$5.35. That would represent a 4% to 10% year-over-year decline in earnings.

If rumors about Apple's LTE modem are confirmed, Samsung installs its own SoCs in more smartphones, and Intel gains more ground with integrated modems, Qualcomm's woes could worsen.

The verdict
Losing Samsung and Apple will inevitably hurt Qualcomm's top- and bottom-line growth. However, investors should remember that Qualcomm chipsets and modems still power the majority of smartphones worldwide.

The fragmentation of the smartphone market also benefits Qualcomm, since smaller OEMs generally won't aggressively develop their own processors or modems. That's why Qualcomm has introduced "turnkey" designs for smaller OEMs to quickly and cheaply develop smartphones using its application processors, wireless modems, and other components. Qualcomm's licensing business, which has generated over $30 billion in revenue since 2010, also provides a steady stream of revenue from its previous patents.

Therefore, Qualcomm won't crash and burn anytime soon. However, it faces a tough year ahead unless it can convince investors that top OEMs like Samsung and Apple haven't outgrown Qualcomm's technology.