When the first performance tests of Intel's (NASDAQ:INTC) new Airmont processor core, which is part of the company's new Cherry Trail tablet chip, first surfaced, it was clear that Intel hadn't improved performance much from its prior generation Silvermont processor.

However, at the recent Intel Developer Forum in Shenzhen, China, Intel showed the following slide giving us a clue as to what the company did with Airmont: 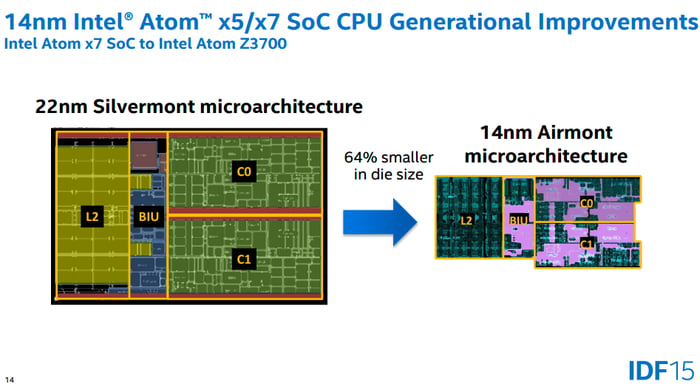 Such a large reduction in the area of the processor core will likely prove to be incredibly helpful in products like the Atom x3, where cost is critical. The smaller the chip, the cheaper it likely is to produce, which means that Intel can sell it for cheaply and still have reasonable margins.

How does the performance hold up?

Airmont is small when implemented on Intel's 14-nanometer technology, but how will its performance hold up relative to the competition? My best guess is that in the 2016 timeframe, an Atom x3 built on 14 nanometer and featuring Airmont CPU cores, will go up against ARM (NASDAQ:ARMH) Cortex A53-based chips.

If Intel delivers Atom x3 chips with four Airmont cores running at 2.4GHz or greater (Airmont inside of the Atom x7-8700 runs at 2.4GHz maximum), then this should be very competitive with 28-nanometer A53 designs.

If Intel releases them in early 2016, then I suspect -- assuming that Intel gets the rest of the system-on-chip right -- the company will have a solidly competitive part that could start making some serious traction. If it's mid-to-late 2016, then the future for Intel's 14-nanometer Atom x3 chips looks less clear.

Should Intel copy ARM Holdings?
I'm beginning to wonder if Intel should copy semiconductor IP giant ARM Holdings in building multiple "tiers" of low-power CPU cores. For example, for the low-cost Atom x3 products, Intel could continue to evolve the Silvermont core, much in the same way that the ARM Cortex A12/A17 are said to be evolutions of the venerable Cortex A9.

The focus on this family of cores would be on lower power and low die area.

Then, for higher-end applications (think premium tablets/phones, low-cost PCs), Intel could develop a larger, more powerful Atom core. This wouldn't be on the same level as Intel's Core family of CPUs, but it would sit between Core and the current Atom lineup.

In other words, the progeny of Silvermont would be Intel's Cortex A53-class cores, then the larger Atom cores would be direct competitors to the ARM A57/A72-class cores. Intel's traditional "big cores" would then sit in a class of their own.

Such a strategy would almost certainly require Intel to bulk up its Atom processor development staff (Intel, surprisingly enough, has only one Atom CPU design team), but given the large opportunities ahead of Intel if it can deliver competitive products, I think it would be a good use of the company's research and development dollars.