As Apple (NASDAQ:AAPL) prepares to relaunch its Beats Music service as a competitor to subscription-leader Spotify, the company may be turning to one of the few singers who actually still gets her fans to pay for songs.

The iTunes owner, which bought Beats for $3 billion in May, 2014, has reportedly approached Taylor Swift and a number of other artists about working with the service, reported Bloomberg. "The idea is that exclusives will be bait for music lovers loathe to pay for subscriptions," the site wrote.

Apple's idea seems awfully similar to the concept being used by Tidal, the subscription music service owned by Jay Z and a number of other artists. That service is also using exclusive content and windows on new releases to lure in subscribers. It's a sound tactic, similar to what Netflix or HBO does with their exclusive original programming, but it has yet to be proven that it will work to get people to pay for music when they have become accustomed to getting it for free.

Swift is the perfect choice
If any artist can get fans to pony up, it's Swift, whose latest album, 1989, sold four million copies in its first 12 weeks, according to Yahoo Music. That's the first time that has happened since 2004, when music sales were much stronger in general. "Seventy albums sold 1 million or more copies in 2004, compared to just four in 2014," wrote the site.

Swift is not only a lone positive when it comes to sales in a music culture that has become all about getting stuff for free, she has also been outspoken about music having value.

"Music is art, and art is important and rare. Important, rare things are valuable. Valuable things should be paid for," she wrote in an op-ed for The Wall Street Journal. "It's my opinion that music should not be free, and my prediction is that individual artists and their labels will someday decide what an album's price point is. I hope they don't underestimate themselves or undervalue their art."

Swift wrote the op-ed after she pulled her music from Spotify's free, ad-supported streaming service.

Swift's 1989 is one of the few albums to go platinum over the last few years. Source: TaylorSwift.com

What is Apple trying to do?
The company, which has had a cash cow with its iTunes store, is trying to force customers back into paying for music. That has become necessary -- in 2014, for the first time ever, sales of digital tracks declined, according to Nielsen, and the decline was significant, as you can see on the chart below.. 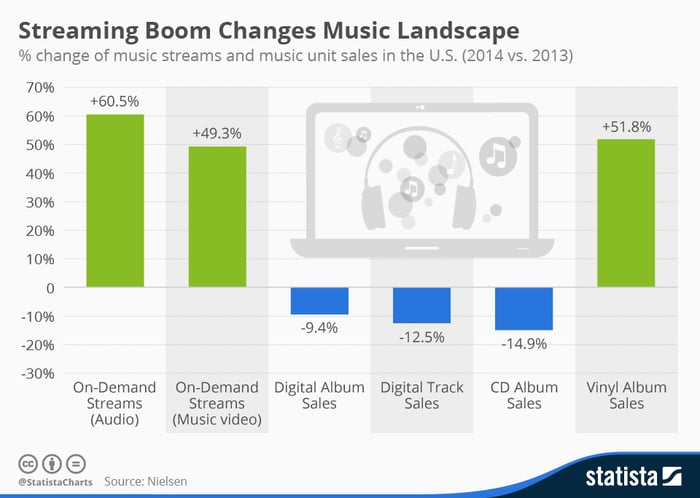 This decline in actual sales (which includes a drop in physical CD purchases as well) is due to free streaming music's explosive growth. That's bad news for artists, record labels, and even streaming music providers, because no company has figured out how to make revenue from ad-supported streaming come anywhere close to the money made selling music.

Will Apple be able to change things?
While it may seem like Apple is fighting the inevitable, the company should benefit from a rising number of artists who believe that the current system is short-changing them. The problem is, or at least could be, that signing artists to exclusive deals will make all paid subscription services less-than-complete. That may not be a deal-breaker for some fans, but it does remove something that has been a major positive for Spotify and the rest of the current generation of paid music services.

Signing an artist like Swift could help Apple gain traction for its new service -- which is expected to cost $9.99 a month for individuals and $14.99 for families -- but some analysts believe the Beats brand will help as well.

"Given how easy it is to obtain free streaming music on the Web, any subscription payment gateway needs to involve a differentiator to warrant a pay model like that," Tom Webster, vice president of strategy and marketing at Edison Research told Bloomberg. For Apple it could be "the power of the Beats brand. That's the X-factor."

That's an overly optimistic view of the value of Beats, but the brand and its founders, Dr. Dre and Jimmy Iovine, do have a certain cache. Add in Swift, a roster of other artists, along with Apple's marketing power, and the company could have something. It should also be valuable that Apple iPhone owners already use the device to pay for apps and other purchases.

All of those factors could help Apple get a subscription service going, but it's going to be a long fight to convince people to pay for music which they have become accustomed to getting for free.