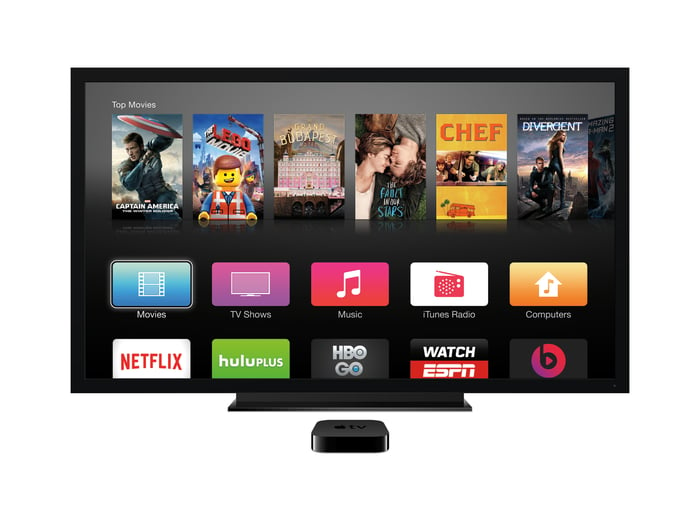 Apple is expected to revamp its Apple TV device this summer and announce the launch of a new streaming service. Image source: Apple.

If Apple (NASDAQ:AAPL) is going to launch an Internet-delivered television service, it needs Walt Disney (NYSE:DIS) on board. The company controls all or part of the most popular networks on cable, including ESPN and Disney Channel. It also owns some less popular networks -- offshoots of Disney Channel, ESPN, and its 50%-owned A&E Networks -- and it reportedly wants Apple to carry all of them.

In February, I wrote that nothing is stopping over-the-top slim bundles such as DISH Network's (NASDAQ:DISH) Sling TV from becoming as bloated as the current cable bundle. Sling TV carries eight Disney-owned networks (nine if you count Maker Studios) in its basic $20-per-month bundle. Nine more are available across various add-on bundles. All told, Disney accounts for around half of Sling TV's programming.

Apple reportedly wants to offer a more diverse programming bundle while keeping the essentials such as ESPN. But unlike most cases, Apple doesn't hold very much power in this situation and would probably have to succumb to any demands Disney might be making, but that might not be a bad thing.

Finding leverage
Apple doesn't want to offer a similar product to what 100 million pay-TV subscribers already have. Apple doesn't enter industries just to do the same thing as everyone else. It wants to offer the best programming at a reasonable price -- something between the sparseness of Sling TV and the overpriced bloat of Sony's PlayStation Vue.

That means negotiating with Disney and other content providers to forgo the bulk of the traditional cable bundle in exchange for a chance to attract more subscribers to their best channels. But Disney already has most-favored-nation clauses in its contracts with cable operators, which require channels such as ESPN to be carried as widely as possible. That means Disney is happy to stick with the status quo.

While cord cutting has been a big concern for some cable operators and media companies, Disney has been able to continue increasing its revenue. Last year, the company's revenue from cable networks increased 5%, with operating profits increasing 7%. With some of the most valuable content on cable, Disney can afford to ask for more from cable operators. Meanwhile, the live sports programming on ESPN attracts a lot of ad spend.

This is all to say Disney holds a lot of leverage in negotiations with Apple. A streaming service without Disney's more popular networks will fall flat, and Disney is happy to stick with the regular cable bundle. It's shown resilience against Sony, which doesn't include Disney networks in its PlayStation Vue service.

Apple can still offer the best value
The advantage that Apple holds in the streaming television industry is that it's not necessarily looking to profit directly from subscriptions. While being able to offer the service for between $30 and $40 a month, as some have reported, would be easier if there's less bloat, it should be able to pull off that price point regardless of the pressure from Disney. Apple owns its own content delivery network, which will help reduce costs associated with streaming video to households.

Comparatively, Sling TV is looking to be profitable, which makes it seem heavily reliant on selling its add-on bundles, considering the costs associated with its core bundle. At the very least, Sling TV margins are lower than the rest of DISH Network's operations.

Ultimately, however, Apple makes its money from selling devices. And if Apple's TV service can provide enough value at a reasonable price, it could attract more users to its Apple TV set-top box or iPad, which has seen a sales decline recently. With the ecosystem that Apple builds around its services, it's likely that one Apple device purchase leads to another. Apple's devices carry much higher margins than subscription pay-TV services. As such, Apple investors shouldn't worry if Disney ends up forcing more channels into any Apple streaming service.