AppleInsider, citing a note to investors from KGI Securities' Ming-Chi Kuo, reported Wednesday that Apple (NASDAQ: AAPL) has made a "last minute decision to recruit TSMC (NYSE: TSM)" for the manufacture of the A9 processor said to be inside the upcoming iPhone.

This is supposedly due to a couple reasons. First, GlobalFoundries, expected to be a "second source" to Samsung (NASDAQOTH: SSNLF) in production of the A9 chip, is reportedly turning out chips with a yield rate of just 30% (this is terrible).

Also, demand for Samsung's S6 smartphone, which uses the company's own 14-nanometer Exynos chip, is said to be higher than anticipated. This reportedly means the South Korean electronics giant is allocating more 14-nanometer wafers for its own needs than originally expected, potentially at the expense of Apple's A9.

This might seem plausible at first glance, but upon deeper reflection, much of this report sounds quite suspect.

These are hardly decisions you can make at the "last minute"

Now, Apple theoretically might have designed the chip for both foundries even while originally only planning to build the chips at Samsung. But does this actually make sense? Assuming both foundries can actually deliver, I would expect Apple to split the orders between them so that neither foundry has too much leverage over Apple.

If Samsung is really doing this to Apple, then can anybody trust it?
If the report is correct in that Samsung might be throwing Apple under the proverbial bus to service its own needs for the S6, then Samsung might have shot its foundry ambitions in the foot. The majority of the leading-edge foundry business available today likely comes from Qualcomm (NASDAQ: QCOM) and Apple, both of which build mobile chips that go into phones that compete with Samsung's.

If Samsung would pull the rug from out under a major customer to service its own chip needs, then how could Apple or Qualcomm trust Samsung's foundry in the future? I find it very difficult to believe Samsung's management would do this if its ambitions to be a foundry player are as large as it has previously indicated. 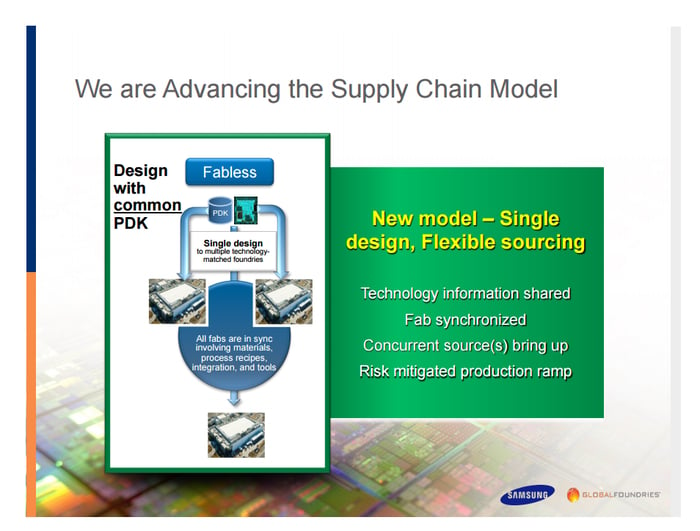 If GlobalFoundries' A9 processor yields are terrible, and if the company's 14-nanometer fab is "in sync" as far as "materials, process recipes, integration, and tools" go, then that doesn't bode well for Samsung's yield rates for the A9 chip.