As investors, we know we're buying companies, not just ticker symbols. Because of that, we need to learn about the underlying company and really get to know its business, its future potential, and its risks. One of the best ways to do this is to read through a company's annual report.

That's why each year, I make it a point to read through SandRidge Energy's (NYSE: SD) annual report. As an investor in the company, I'm always trying to learn more about SandRidge, and hopefully walk away with something new. This year, there were three things that stood out for me as I read the report, and I'm willing to bet most investors in the company didn't know about them.

Over the past few years, energy companies have gotten really good at finding oil and gas. Advancements in 3-D seismic technology have really taken out a lot of the guesswork when it comes to finding new oil and gas reservoirs. Those advancements have really reduced the amount of dry holes an oil and gas company drills. That said, it's still not a perfect science.

SandRidge Energy pointed out its imperfections in its annual report:

The concern here is that the company is either taking more risks, or it's running out of good exploration areas. Suffice it to say, this is something investors need to watch as exploration success is vital to the long-term growth of energy companies like SandRidge.

We feel threatened by a chicken
A new emerging risk for SandRidge comes from an unlikely source. In the company's annual report, it points out that the "recent listing of the lesser prairie chicken as a threatened species under the federal Endangered Species Act may serve to delay or limit the operations of the company." This is because:

Exploratory and producing operations in areas where threatened or endangered species or their habitat are known to exist may require the company to incur increased costs to implement mitigation or protective measures and also may delay, restrict or preclude drilling activities in those areas or during certain seasons, such as breeding and nesting seasons.

Those increased fees would affect the company's returns, which have already been weakened by low oil prices. Suffice it say, this is certainly not a typical risk factor we'd find in an energy company's annual report.

We might cause earthquakes
Another new and emerging risk for SandRidge Energy is the fact that there are links between saltwater disposal wells and increased seismic activity. The company noted this risk in its annual report:

That's a very grave risk for SandRidge as it disposes a lot of water due to the geology of the Mid-Continent as the oil and gas-saturated rocks it targets also contain a lot of water. That water adds to production costs, which is why the company has invested $600 million on its saltwater disposal system, as noted on the following slide. 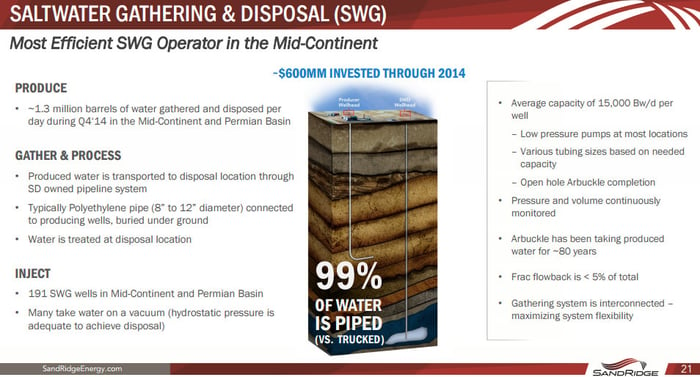 This system saves SandRidge money as it doesn't need to truck the water out, and it has become a competitive advantage for the company in the region. However, the company notes a concern in its annual report:

There exists a growing concern that the injection of saltwater into belowground disposal wells triggers seismic activity in certain areas, including Oklahoma, Kansas and Texas, where the Company operates. In response to these concerns, regulators in some states are pursuing initiatives designed to impose additional requirements in the permitting of saltwater disposal wells or otherwise to assess any relationship between seismicity and the use of such wells.

These measures could increase SandRidge's costs, which would reduce its returns on Mid-Continent wells. Moreover, under a worst-case scenario, saltwater disposal wells could be limited in the regions in which it operates, or even forbidden. That could force SandRidge to truck its water elsewhere or find another, likely more expensive, solution for the water, such as building a water recycling plant.

Investor takeaway
The energy sector is a risky one for investors. Not only do we need to deal with volatile oil and gas prices, but companies also have their own more specific risks. In SandRidge Energy's case, we learned that the company's exploration efforts struggled mightily last year, which could signal trouble down the road. Meanwhile, the company is facing risks from nature, as chickens and earthquakes could shake its operations to the core.