Sierra Wireless (NASDAQ: SWIR), a manufacturer of 2G, 3G, and 4G LTE embedded modules and gateways, is a pure play on the booming Internet of Things (IoT) market. Its products are used in M2M (machine-to-machine) communications across a wide variety of industries, including the transportation, healthcare, industrial, mobile computing, payments, and security sectors.

Sierra is the largest M2M embedded module maker on the market, with a 34% global market share as of last July, according to ABI Research. That dominance, combined with rising investor interest in the IoT market, caused shares of Sierra to surge 78% over the past 12 months. After that big rally, investors are likely wondering whether or not Sierra still has room to run.

Both businesses are growing. Last quarter, OEM revenue rose 27% year over year as Enterprise revenue climbed 16%. However, Sierra's OEM business accounted for 87% of its top line. During the quarter, the OEM unit had gross margins of 30.4%, compared to 54.2% at the Enterprise unit.

This means the growing weight of the OEM business on Sierra's top line could eventually have a negative impact on companywide margins. However, Sierra has kept its gross margins in a fairly tight range over the past five years. 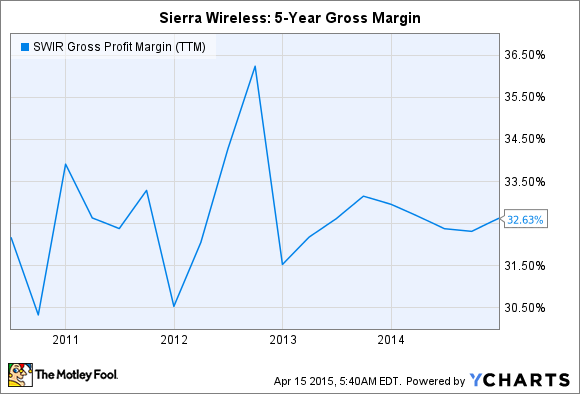 Last quarter, Sierra's non-GAAP earnings from operations rose 287% year over year to $10 million. Those results exclude the impact of stock-based compensation, acquisition costs, foreign exchange impacts, and other expenses. On a GAAP-adjusted basis, it reported a net loss of $1.7 million, a slight improvement from a net loss of $1.9 million a year earlier.

Sierra bought Wireless Maingate for just 15 times EV/EBITDA, which caused some analysts to question Sierra's own valuation -- the company sports a trailing EV/EBITDA of 175. As we mentioned earlier, Sierra is a predominantly hardware-focused company. Wireless Maingate, however, offers a more balanced mix of both higher-margin software and lower-margin hardware. This comparison is important because Sierra lacks direct, publicly traded industry rivals that only sell M2M modules and software.

But if we look forward, Sierra's ratios cool down considerably. Sierra's forward EV/EBITDA of 17 is comparable to Wireless Maingate's acquisition value, and it trades at 24 times forward earnings. For fiscal 2015, Wall Street expects Sierra's revenue to rise 17.3% year over year and its non-GAAP EPS to improve 76.1%.

Risks and rewards
Although Sierra is the market leader in M2M embedded modules, it could lose that lead to rising players in the fledgling market.

Two disruptive rivals are Huawei and ZTE, two Chinese handset makers that could flatten price expectations across the OEM market. If Huawei and ZTE start exporting their M2M modules across emerging markets, Sierra's OEM margins could slip. Sierra's acquisition of Wireless Maingate also exposes it more to the European market, and the weak euro could weigh down its GAAP earnings.

However, Sierra's tiny market cap of $1.2 billion makes it a lucrative target for big companies looking to expand their IoT presence. In my opinion, rising IoT players like Intel (NASDAQ: INTC), Qualcomm (NASDAQ: QCOM), and Cisco could all be potential suitors.

The bottom line
Sierra Wireless has impressive growth potential, but it could face considerable challenges in the near future. If new rivals reduce price expectations, Sierra's margins could crumble. However, if Sierra maintains its market lead and continues diversifying its top line via acquisitions, it could become a fairly balanced play on the booming IoT market.