Chances are, you and your spouse will have a younger retirement age than expected.

What is your expected retirement age? Go ahead and write it down, or at least make note of it before continuing.

Now, take that age, and cut it by five years. Using historical data compiled by Gallup, that is when you'll actually retire. 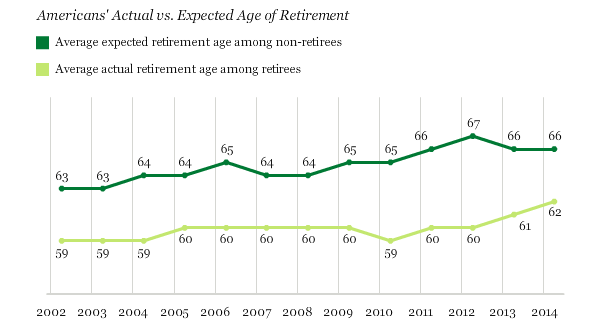 The disconnect between planned retirement age and actual retirement age can have serious implications, and the sooner people become aware of this disconnect -- and make adjustments to their assumptions -- the better.

Why do people retire earlier than expected?

Back in 1995, the average American expected to retire at age 60. There are lots of reasons that has bumped up to 66 today.

The Great Recession wiped out the savings of many, and several soon-to-be retirees lost their jobs during that period as well -- further hampering savings. Folks have to work longer to make up the difference.

Life expectancy has also increased, and many want to work longer to remain connected with something that offers purpose and meaning.

Given these factors, why are people retiring earlier than expected?

A Merrill Lynch/Age Wave report published last year helps answer that question. Researchers found that nearly 60% of retirees retired earlier than expected. Of those who did, here's what led them to early retirement.

Why Did You Retire Earlier Than Expected? | Create infographics

Kudos to those who retired early because they wanted more time with loved ones, or had accumulated enough to do so. But, as you can see, there are several not-so-fun circumstances that lead to early retirement as well. Because we don't anticipate these events, we're caught underprepared when they crop up.

Lowering your expected retirement age by five years helps you build in a margin of safety. It forces you to save more, cut down on spending, and set more realistic goals while you still have time to take action and make a difference.

Millenials are even worse
Gallup found a noticeable disconnect Millennials have with their planned retirement age and their behavior to achieve that goal. When Gallup asked when they planned to retire, Millennials answered "Under 55" at a rate almost four times higher than Gen Xers.

On the one hand, we could say that this is great: Because Millennials are planning on retiring at an earlier age, they must be doing the saving and investing necessary to reach that goal.

But this assumption simply doesn't match with reality. A UBS study conducted last year found that Millennials were keeping an alarming portion of their savings in cash.

How Do You Invest Your Savings? | Create infographics

While being fiscally conservative can have its advantages, by putting so much money in cash -- and showing little interest in putting toward stocks -- Millennials are missing out on the greatest wealth creator available to them. At the same time, the relative value of the cash in their savings accounts decreases every year, making retirement before the age of 55 much more of a dream than reality.

As Gallup noted in its analysis, "This could be because younger Americans, given the many years they have until retirement, may not understand the financial realities and challenges of funding retirement that middle-aged Americans are more familiar with."

Time is the major advantage Millennials have on their side. The sooner they wake up and smell the coffee, the better.