The ability to spot powerful new technologies or industries early on can result in eye-popping returns for investors. The brave few that initially recognized the potential of Tesla Motors' electric car, for example, have been richly rewarded over the past few years: 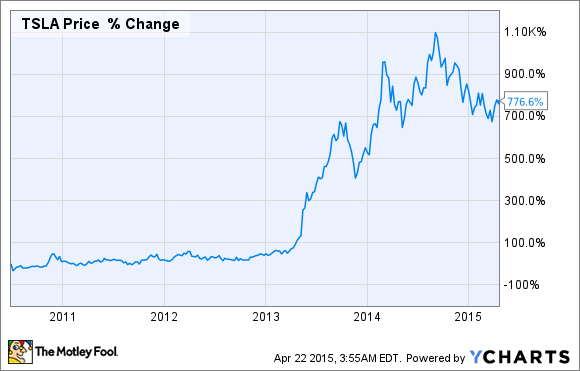 As both of these fledgling industries are fraught with significant risks, though, I think it's worthwhile to consider which one offers investors the better risk-to-reward ratio going forward. With this in mind, let's compare their respective value propositions in relation to their risk profiles and consider potential avenues for investment via publicly traded companies.

Legalized marijuana is the fastest growing industry in the U.S. right now
Because of the built-in demand for legalized marijuana by U.S. consumers, the industry has been growing at a stunning pace lately. From 2013 to 2014, for instance, the Arcview Group estimated that legalized marijuana sales grew from $1.5 to $2.7 billion, representing a whopping 74% annual growth rate.

The really exciting part, though, is that this rocket-like growth rate isn't expected to slow down anytime soon. As more states legalize marijuana for recreational and medical uses, sales are projected to top $10 billion by as early as 2018.

But the industry may grow even faster still because of pending legislation in both houses of Congress that would change marijuana's federal classification from schedule I to schedule II, removing tons of red tape for legalized cannabis-based businesses, as well as medical researchers investigating the potential clinical benefits of the drug.

If these bills eventually become law, marijuana legalization would turn into a states' rights issue, removing the threat of Federal prosecution. That event would go a long way toward de-risking the industry for would-be marijuana entrepreneurs, and it would open the door for well-financed entities to enter the market.

A major hurdle right now, though, is the lack of decent investing vehicles in the space. Most so-called "marijuana stocks" have lost so much of their value recently that they are hanging on for dear life, pushing them into penny stock territory (never a good place to put your money).

And the few stocks that are associated with reputable companies have jumped so high that they no longer represent compelling valuations. The British-based medical cannabis company, GW Pharmaceuticals (NASDAQ:GWPH), for instance, has seen its stock absolutely explode: 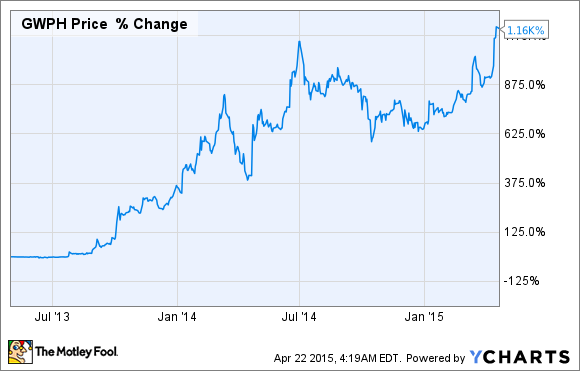 As such, it is now trading at over 40 times 12-month trailing revenue, despite the fact that the company is years away from becoming cash flow positive.

Gene therapy might finally be coming of age
Gene therapy was once heralded as a revolutionary approach to medicine that would cure numerous devastating diseases such as cystic fibrosis, Duchenne muscular dystrophy, among others. And then the industry pretty much collapsed overnight following a handful of high profile deaths linked to patients receiving gene therapies around the turn of the century.

Although gene therapy might appear to causal observers to have gone in hibernation since 2000, the truth is that scientists have been busy developing far more effective and safer viral vectors to deliver therapeutic genetic material, as well as gaining significant insight into the genetic underpinnings of disease in general.

All of this hard work has culminated in what many are calling "gene therapy 2.0". Last year, bluebird bio (NASDAQ:BLUE) reported that its second-generation gene therapy, LentiGlobin BB305, was a safe and effective treatment for patients suffering from the rare blood disorder beta-thalassemia.

In short, the first four patients receiving LentiGlobin have been transfusion-free for several months, after just a single dose of the gene therapy. The company thus believes that LentiGlobin could be a functional cure for beta-thalassemia. And the market appears to agree: 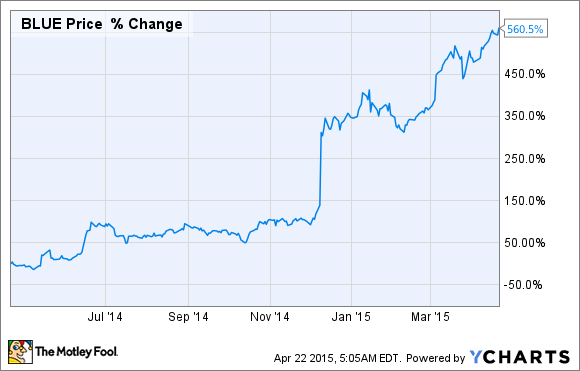 But gene therapies aren't just for rare diseases. Celladon Corp. (NASDAQ:EIGR) and uniQure N.V. are developing therapies for advanced heart failure, a condition that affects over 2 million people in the U.S. and EU at present. What this means is that the gene therapy market could grow in a major way if either one of these companies can break into the massive heart failure market, estimated to already be worth $20 to $25 billion.

Which industry should investors dig into for out-sized gains?
In my view, the legalized marijuana industry is somewhat less risky than gene therapy at the moment, especially given that Federal legislation is now being openly debated in Congress. That said, legal cannabis doesn't offer investors an easy, or safe, route toward participating in the industry's rapid growth. Once you take penny stocks off the table, you are left with relatively few options besides GW Pharmaceuticals and its seemingly bloated share price.

On the other hand, the risk profile for gene therapies might change in a heartbeat later this month, if Celladon's ongoing midstage trial, CUPID-2, for systolic heart failure turns out to be successful. Indeed, I would expect investors to flood into this emerging industry if Celladon follows in bluebird's ground-breaking path, making it a key event to keep tabs on.

Overall, I think investors looking for the next big thing should take a deep look at gene therapy, and perhaps shelve their enthusiasm for legalized marijuana for the time being.