Starbucks (NASDAQ:SBUX) is a business firing on all cylinders. Its cafes are enjoying rapid global expansion and impressive same-store sales increases, while its packaged goods business is also delivering strong growth. Together, these factors have helped Starbucks deliver record revenue, operating income, and cash flow, and shareholders have benefited from a 30% surge in the stock price over the last year to a near-record high. So what could possibly go wrong?

While Starbucks continues to expand in developed markets, much of its future growth will come in developing economies such as China and India. The risk here is that Starbucks' cafes in emerging markets fail to deliver the type of performance investors have come to expect in areas such as the U.S. In addition, competitors such as Yum! Brands (NYSE:YUM) are increasing their coffee offerings in an attempt to take share in the vital Chinese market.

Although investors should monitor this situation closely, recent results offer evidence that Starbucks is well positioned to win in these massive growth markets. In fact, Starbucks' China and Asia Pacific, or CAP, region increased comp sales by 8% in the first quarter, driven entirely by growing traffic. Even more impressively, the CAP segment has delivered 18 consecutive quarters of at least 20% revenue growth. Furthermore, management said at Starbucks' recent annual shareholder meeting that it plans to accelerate the pace of new store openings in the region, and highlighted the "huge potential" of India and other emerging markets.

Lastly, competition is nothing new to Starbucks. It delivered those strong CAP results even as McDonald's (NYSE:MCD) attempted to grab some market share with its McCafe line of coffee products. And, while Yum! Brands has nearly triple the number of franchises in China as does Starbucks, its KFC chain is more of a direct competitor to McDonald's than to Starbucks. KFC also doesn't have the same level of brand prestige and appeals to the more price-sensitive Chinese consumer. So while McDonald's coffee sales might be pressured by KFC's push into the Chinese market, Starbucks results should remain largely unaffected.

Same-store sales growth could disappoint
For the last 20 consecutive quarters, Starbucks has delivered global same-store sales growth of at least 5%.  That's an incredibly strong and consistent performance, particularly for such an established large-cap company. But Starbucks' success has set the bar high for future quarters; should it falter, the stock could become the victim of sky-high investor expectations.

However, while there's always the risk that Starbucks' same-store sales figures could disappoint in any one quarter, several factors are likely to drive solid comps growth in the years ahead. The company is expanding its breakfast and lunch offerings with new food products, and its Teavana teas should boost growth by complementing Starbucks' coffee lineup. Also of benefit will be Starbucks' in-store K-Cup sales, which should further drive traffic to its locations.

Consumer behavior is changing
This is the risk I'm most concerned about when it comes to Starbucks' long-term business prospects. Founder and CEO Howard Schultz himself highlighted this threat when speaking about the pronounced shift in consumer shopping behavior.

"Holiday 2013 was the first in which many traditional bricks-and-mortar retailers experienced in-store foot traffic give way to online shopping in a major way," he said in January 2014.

The growth of e-commerce has been unrelenting, and it shows no sign of stopping in the foreseeable future. 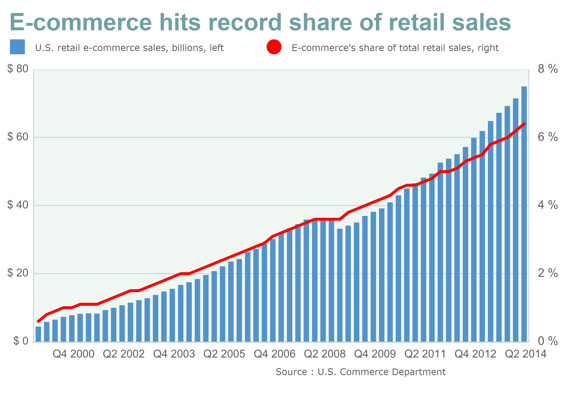 Internet titans such as Amazon.com (NASDAQ:AMZN) are steadily taking share from their brick-and-mortar rivals thanks to a wider selection of goods, lower prices, and a more convenient shopping experience. That could be bad news for Starbucks, which benefits from the traffic generated by brick-and-mortar retailers in malls and strip malls around the world.

However, it's been more than a year since Schultz made those comments, and he and his team have taken action to meet the challenge head-on. Most notably, Starbucks is launching a new delivery service that should offset some of the traffic lost as more consumers shop online.

This trend also highlights the importance of Starbucks' packaged goods business, as these sales will help to mitigate the loss of in-café sales if more consumers purchase Starbucks' coffee at grocery stores for consumption in their homes. Still, the global trend toward online shopping will remain a risk to Starbucks' business model, and investors might wish to monitor its impact closely in the years ahead.