Top-10 U.S. homebuilder Meritage Homes (NYSE:MTH) has been aggressively expanding its geographical footprint over the past few years, a smart move to reduce the regionally cyclical nature of housing and to position the company for big growth in new markets. With the company's first-quarter earnings release out, we can see the benefit, with units sold up 20% and revenue rising 27%.

But there were also some challenges, with profit down 35% from the year-ago period. The highlights:

While earnings fell in the quarter, management is confident that profits will increase as the year progresses. Let's take a closer look at some key takeaways from the earnings release.

Costs up, margins down
Meritage Homes' gross margin percentage in 2014 was 22.8%, but that number fell to 18.5% in the first quarter, due to several factors. Management said a change in selling mix, and some accounting adjustments related to last year's Legendary Homes acquisition, negatively affected margins, but the primary culprits were higher costs and slower price appreciation over the past few quarters.

Based on the table below, it's looking like last July's acquisition of Legendary Homes, which greatly expanded Meritage's presence in the Southeast, is having an outsize impact on gross margins: Management expects margins will improve over the course of the year, and should finish 2015 closer to 20%, with much of the rebound happening in the second half.

Positive momentum
While higher costs bear watching, there were a number of key positives in the quarter as well. Not only did the company's backlog of home orders increase substantially, but the average price of those backlog orders came in at $403,000, up 10% from last year and a 2% increase sequentially. Depending on the mix of those sales -- though higher price is usually better -- 2% higher revenue could significantly help bridge the gap on gross margin.

Cancellations also declined in the quarter to 11%, from 13% last year.

There had been some concern that the central region -- which is largely Texas -- would feel a major pinch from falling oil prices impacting housing demand. But sales were actually up in Texas, as were the average number of homes per month sold by community. The backlog and total orders both declined, but this was largely the product of 18% fewer communities, as the oil boom of the past few years led the company to sell through several of its communities more quickly than expected.

Sometimes it's better to be lucky than good, and that could be the case for Meritage and Texas, as the company's inventory in the state has dropped right as the oil oversupply is poised to impact housing demand.

Looking ahead
The market is kicking Meritage while it's -- sort of -- down today, with the stock trading about 6% below yesterday's closing price as of this writing. This is partly due to the earnings release, but also a report that U.S. new home sales declined sharply in March. Or at least they declined in March from February levels -- they were actually up from last year. But either way you slice it, new home sales remain well off historical rates.

The point is, today's sales news is definitely a factor, with pretty much all of the big homebuilders' stocks down at least 3%: 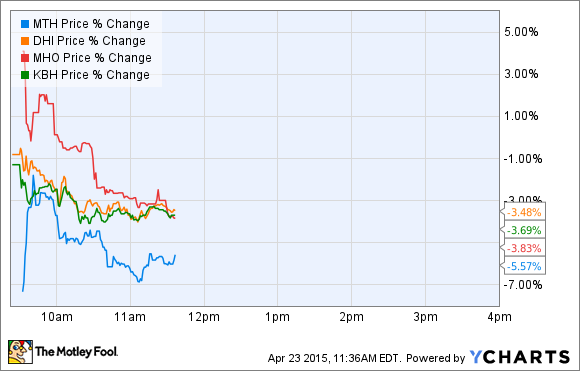 Wrapping it all up, Meritage's key metrics appear to be fine, and its margins -- the key thing that drove profits down -- are being heavily affected by the Legendary Homes acquisition, as well as a slower rate of price increases in some markets. These are most likely temporary headwinds, and management seems to agree, guiding to about double the profits in the second half of the year over what is expected in the first half.