In the shootout between pistols and revolvers, only one can come away a winner. Image: Smith & Wesson.

Choosing something to be "the best" is always a subjective bit of speculation, and the decision is no less difficult when that object of desire is a handgun. It seems whatever common ground people may find regarding the Second Amendment falls apart on the range as everyone has their own preference for form, fit, carry, and purpose.

And with so many options, firearms enthusiasts have plenty from which to choose. According to the Bureau of Alcohol, Tobacco, Firearms & Explosives, some 60 million firearms have been manufactured since 2009, with at least another 10 million being added every year. More than five million handguns were manufactured in 2013 alone, 86% of which were pistols.

The sizable portion of pistols manufactured might lead some gun enthusiasts to believe a pistol should earn the title of the best handgun on the market today. However, results from the NRA's Shooting Illustrated 2015 Golden Bullseye Awards for Handgun of the Year say differently.

Today's handgun enthusiast
Before we reveal the winner, let's just say that it's nearly impossible for one award to reflect the tastes of a populace that is constantly evolving. No one knows for sure how many people actually own handguns in the U.S. -- estimates cite anywhere from one-quarter to almost one-half of the population -- and the National Shooting Sports Foundation says 90% of the gun owners they surveyed report those who own a handgun also own more than one firearm.

It also found these statistics about new gun owners:

So when you're talking about hundreds of millions of people, finding any single handgun that cuts across all lines is not easy.

Pistols vs. revolvers
Despite differences in firearms taste, the classic John Browning model 1911 pistol -- which was first designed over 100 years ago -- has been one of the most popular handguns over the past few years. In fact, Freedom Group -- the private-equity backed owners of such long gun brands as Remington and Bushmaster -- says that the 1911 category model alone accounted for 13% of all handgun sales in 2013, or some $325 million worth of the total.

So when Shooting Illustrated magazine published their 2015 Golden Bullseye Awards Handgun of the Year, and didn't choose a 1911 model or any other pistol, its readers were undoubtedly surprised by their final selection -- a revolver.

Top gun
The magazine chose the Smith & Wesson (NASDAQ:SWBI) Model 69 .44 Combat Magnum as the best handgun introduced in 2014. The model 69 was one of nine new guns the firearms manufacturer introduced last year.

As Shooting Illustrated asked itself, "Why did a magazine that covers the latest and greatest tactical and personal-defense firearms choose a revolver as its handgun of the year? Because revolvers still have an important place in the defensive realm, and the Model 69 takes the platform to an exciting new level." 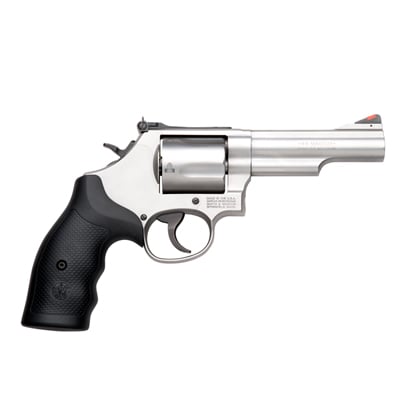 What the L?
The Model 69 has a number of unique features that separate it from the pack and make it a worthy choice. Built on Smith & Wesson's "extra medium" sized L-frame design, the 69 becomes the first .44 magnum designed on the platform and the first to be built on anything but the large N-frame (the L is slightly larger than the medium-sized K-frame). And because a five-shot wheel was chosen instead of a six, its compactness gives it a decent balance between weight and size without the problems that were associated with the more powerful rounds even when housed in the larger frame. 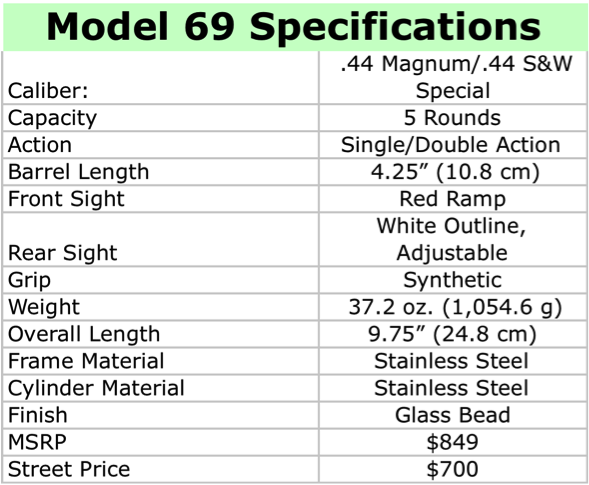 Elmer Keith is the storied developer of the magnum cartridge, first the .357 in the 1930's, then later the .44 in the 1950's, and the .41 in the 1960's. He pushed both Smith & Wesson and Remington to produce commercial versions of this high-power load, which he saw as a perfect sidearm for hunters of large, dangerous game and today's .44 is certainly adaptable for self-defense rounds. The light, compact, concealable Model 69 seems to fall right into line and is a worthy predecessor of Keith's favored Model 29 six-shooter.

Handgun hall of fame
Shooting Illustrated hails the Model 69 as a "masterful piece of engineering," ensuring the revolver will take its place among the classic handguns of all time.

What's your take on this Smith & Wesson revolver? Do you agree the Model 69 deserves the title of Handgun of the Year, or do you have a favorite model of your own that should have been chosen instead? Let me know in the comments section below.