When Twitter (NYSE:TWTR) reported fourth-quarter results in February, the social network did what it has done most quarters since it went public in late 2013: It reported better-than-expected monetization and worse-than-expected user growth. When Twitter reports first-quarter results on Tuesday, investors will be holding the growth stock to high standards, looking for signs that the company's efforts to reinvigorate user growth are paying off. And of course, continued expectations for excellent monetization are a given.

The expectations
As revenue climbs and Twitter's business scales, analysts expect the company to continue to move toward profits in the report on Tuesday. Analysts, on average, expect non-GAAP EPS of $0.04, up from a zero profit in the year-ago quarter.

What about revenue? The consensus estimate for Q1 revenue is $456.5 million, up an impressive 82.2% from the year-ago quarter.

The bar for Q1 is set high. Revenue and EPS growth in Q4 were no joke. In Q4, Twitter reported EPS of $0.12, crushing expectations for $0.06. Revenue was $479 million, compared to estimates of $453.1 million. Revenue soared 97% from the year-ago quarter, and non-GAAP EPS jumped to $0.12 from $0.02 during the year-ago period. The growth in Twitter's business was driven by its soaring ad revenue per 1,000 timeline views as the social network refines its ad products and continues to appeal to new advertisers. 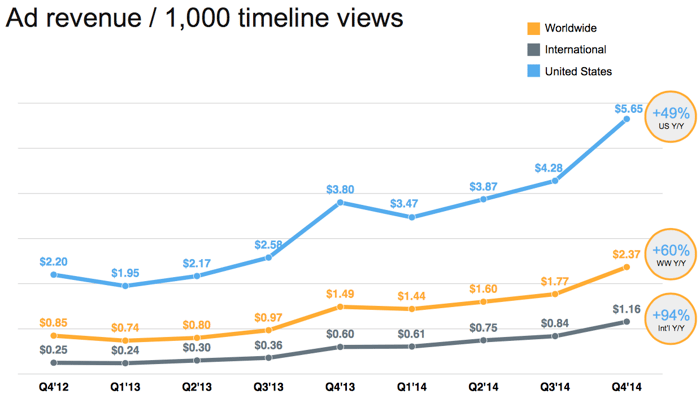 Looking for user growth
While the improvement in Twitter's monetization of users since it went public has definitely been impressive, its current high growth rates of revenue per 1,000 timeline views are not sustainable for the long haul. This is why investors want to see signs Twitter can accelerate user growth. User growth can combat any deceleration that may occur in Twitter's growth in user monetization. 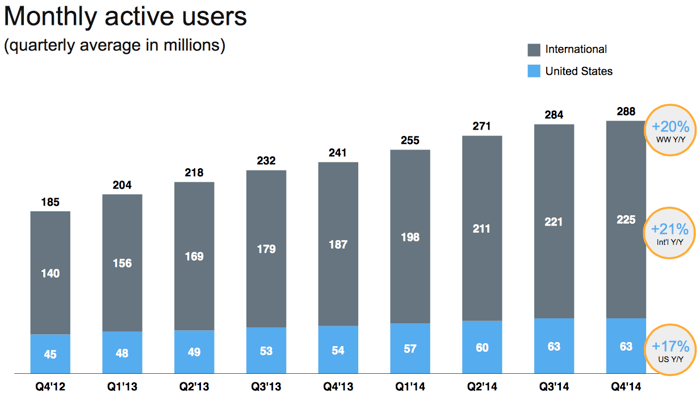 Twitter's reported 288 million MAUs in Q4 was only up 4 million from the quarter before. Sure, that's a 20% jump from the year-ago quarter; but this isn't the sort of growth investors expect from the young social network.

Could Twitter's user growth rebound in Q1? Twitter CEO Dick Costolo thinks so. He predicted during the company's fourth-quarter conference call that sequential user growth would reaccelerate, pointing to positive user growth trends in the first month of Q1: "Importantly, I want to highlight that the user numbers we saw in January of this year indicate that our MAU trend has already turned around and our Q1 trend is likely to be back in the range of absolute net ads that we saw during the first three quarters of 2014."

What was Twitter's growth like in the first three quarters or 2014? Sequentially, Twitter was adding 12 million to 16 million users. Therefore, if Costolo's projections for user growth in Q1 are correct, Twitter should report 300 million to 304 MAUs for Q1. While this would, indeed, mark a reacceleration in sequential growth, Twitter's year-over-year growth would actually be slightly down from the prior quarter.

Twitter hopes its efforts to improve engagement will help the service attract and keep more new users. These efforts include new sharing features such as a range of new ways to send direct messages and an attempt to reduce friction for new users with tools like its "instant timeline," which makes it easier for new users to find relevant followers when they sign up.

When Twitter reports its first-quarter results after market close tomorrow, the report will be available here. Stay tuned to The Motley Fool for post-earnings Foolish analysis.