General Electric Co. (NYSE: GE) isn't known for giving up ground. But earlier this month GE announced a sell-off unlike any it has ever done before, reshaping the very foundation of this dividend stock. Here's what you need to know.

The details
General Electric is one of the largest corporations in the world. With a $270 billion market capitalization, investors have high expectations that can sometimes be hard to beat. When you're already so big, how do you get bigger? Apple (NASDAQ: AAPL) accomplished this by famously entering new territory with the iPhone, and Tesla Motors is expected to be the latest player to diversify revenue streams with a predicted official entry into energy storage later this week.

But some expansions aren't for the best, and diversification can actually be "diworsiification" if companies stray too far from their competitive advantage. In this vein, GE has officially decided it shouldn't be in the financing business. The corporation announced earlier this month that it would sell of almost all of its GE Capital segment, and will instead focus on growing its industrial businesses.

"This is a major step in our strategy to focus GE around its competitive advantages," GE Chairman and CEO Jeff Immelt said in a statement. "GE today is a premier industrial and technology company with businesses in essential infrastructure industries. These businesses are leaders in technology, the Industrial Internet and advanced manufacturing. They are well-positioned in growth markets and are delivering superior customer outcomes, while achieving higher margins. They will be paired with a smaller GE Capital, whose businesses are aligned with GE's industrial growth."

General Electric estimates that more than $90 billion of this latest shake-up will be returned to investors through various channels by 2018. The market's response was overwhelmingly positive, with GE's share price jumping around 15% following the announcement. After what had been a rough start to 2015, this latest announcement puts GE's returns well above those of both the S&P 500 (SNPINDEX: ^GSPC) and the Dow Jones Industrial (DJINDICES: ^DJI). 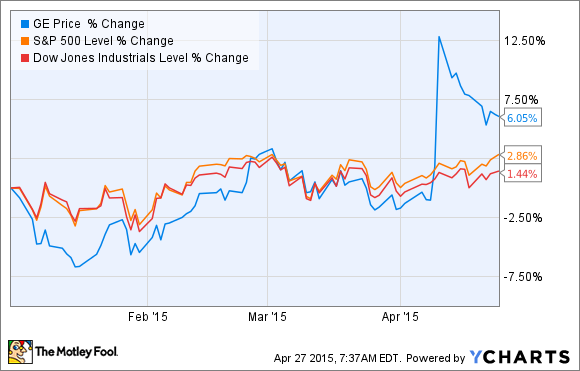 Next steps
General Electric has been lining up buyers for quite a while. The conglomerate spun off much of its retail finance business into Synchrony Financial in 2014. Now, The Blackstone Group L.P. is snagging the bulk of its real estate assets while Wells Fargo & Co. (NYSE: WFC) has agreed to buy an undisclosed portion of performing loans at closing. All in all, these assets and others will account for approximately $26.5 billion in sales.

But even more important than GE's big sell-off is what will be left afterward. By 2018, General Electric Company expects more than 90% of its earnings to originate from its "high-return" industrial businesses, a major boost from 58% last year. The company will hang on to about $90 billion in financial assets that are directly linked to industrial businesses such as aviation services, medical equipment, and electricity generation . 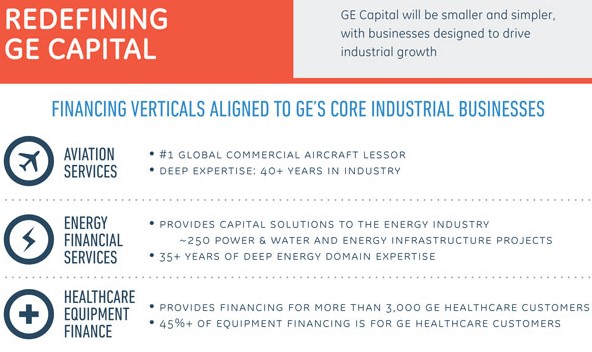 For investors, this decision represents a clearer path between GE's cash cow status and shareholders' pockets. GE's financial arm was an unruly pet project of former CEO Jack Welch , and grew out of a perceived necessity to do something with its massive capital portfolio on a scale and at a speed that industry, alone, couldn't support. Since current CEO Jeff Immelt took over the reins in 2000, General Electric Company has been clawing its way back from the cluttered conglomerate many have blamed for its lackluster stock performance.

Now, General Electric Company is pivoting and has identified shares and shareholders as the best repository for all that cash. As part of its restructure, GE plans to buy back up to $50 billion in shares , the second-biggest buyback in history behind Apple Inc's $90 billion repurchasing plan . As for GE's dividend, it'll stay put through 2016 at $0.92 per share (currently a 3.7% rate), but will plan to grow it thereafter .

As a GE shareholder since 2012, I've been waiting for this moment. General Electric Company had a case of the "blue chip blues" for far too long, wandering aimlessly among acquisitions and new business ideas. For as long as I've been an investor, its leadership and industrial niche have always been better than its bloated business model has allowed for, and this latest decision marks the beginning of a new start for GE. It's putting common sense shareholder interest first and creating a simpler dividend stock for interested investors. For long-term GE shareholders, this latest announcement is welcome news.