T-Mobile US (NASDAQ:TMUS) reported results for the first quarter of 2015 this morning. The wireless network operator exceeded analyst estimates by slim margins on both the top and bottom lines.

Investors didn't seem overly impressed as the stock hardly moved on the news, although the same lack of spirited response can also be seen as validation of T-Mobile's recent share price surge. The stock has gained more than 26% year to date. That's far ahead of the S&P 500 market index, and also a big win over larger rivals Verizon (NYSE:VZ) and AT&T (NYSE:T). Under these circumstances, simply maintaining the soaring stock price without a hiccup at earnings time is impressive. 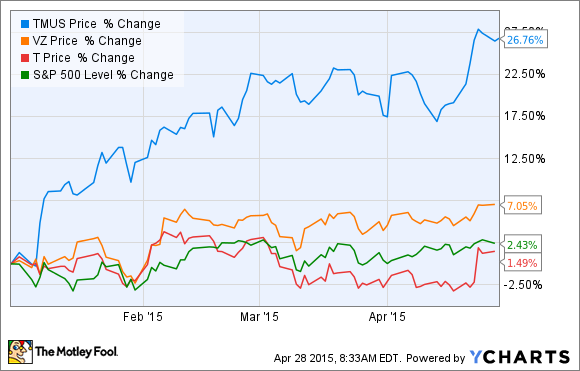 In the first quarter, analysts were looking for a  generally accepted accounting principles loss per share of $0.10 on $7.7 billion in total sales. The company delivered a $0.09 loss per share on sales of $7.8 billion. The net loss was less than half of the year-ago period's red ink, and revenue increased by 13% year over year.

T-Mobile likes to track EBITDA earnings as well, even if analysts generally don't issue estimates for these operating results, adjusted to remove the effects of financing and accounting moves. Here, the year-ago period's EBITDA margin of 20% increased to 24%, resulting in 28% year-over-year EBITDA growth. 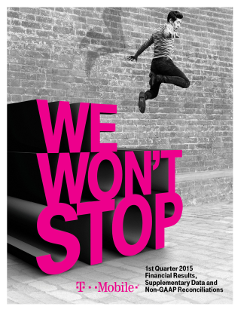 The company signed up 1.8 million net new subscribers during the quarter, including 1.1 million in the highly profitable postpaid service bucket. In the same period, AT&T added 441,000 net new postpaid subscribers and Verizon signed up 565,000 new customers in that category.

The Data Stash policy, introduced in December as Un-carrier 8.0, hurt T-Mobile's earnings while adding to the subscriber sign-up and retention statistics. The company seems willing to sacrifice short-term income in exchange for a larger market share.

Management expects to maintain this strong momentum in 2015. The guidance for postpaid subscriber additions this year was tightened and raised by 20%.

"We expect to once again capture all of the industry's postpaid phone growth in Q1 and we've done it while delivering an all-time record low 1.3% churn," said T-Mobile CEO John Legere in a prepared statement.