Twitter (NYSE:TWTR) stock was plunging by more than 18% on Tuesday after the market close, as the company announced disappointing sales numbers for the first quarter of 2015 and reduced guidance for the full year.

In a confusing and ironic episode, research firm Selerity leaked via Twitter the earnings report 45 minutes before the market close. This raised some concerns regarding Twitter's internal control capabilities, and it added to the negativity in the context of disappointing revenue figures.

On revenue and profits
Revenue for the first quarter of 2015 came in at $436 million, an increase of 74% compared to $250 million in the same period last year. Excluding the impact of changes in foreign exchange rates, total revenue would have increased 80%. The number came in below expectations, as Wall Street analysts were, on average, forecasting $456 million in sales during the quarter.

Earnings were better than expected, though, as the company reported adjusted earnings per share of $0.07 versus an average forecast of $0.04 per unit.

Growing users, falling engagement
Average Monthly Active Users, or MAUs, were 302 million during the period, up 18% versus the same quarter in the prior year. Sequentially, Twitter gained 14 million users versus 288 million monthly users at the end of the previous quarter. 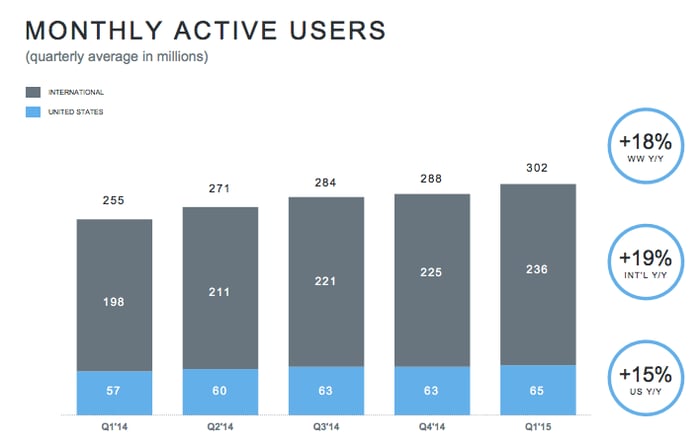 In the fourth quarter last year, Twitter reported only 4 million new users sequentially, so there was some improvement in this very important area. Mobile MAUs represented approximately 80% of total MAUs during the last quarter.

Guidance for the second quarter was also a disappointment. Management expects revenues to be in the range of $470 million to $485 million, significantly below the $538 million forecasted, on average, by analysts.

Twitter announced that it's buying marketing technology company TellAppart for an undisclosed amount. The company is also partnering with Google (NASDAQ:GOOG) (NASDAQ:GOOGL) and its DoubleClick platform to improve advertising performance measurement and attribution for Twitter direct-response marketers.

Investors tend to exaggerate their reactions to negative earnings announcements, especially when it comes to a volatile growth company such as Twitter. Also, the premature earnings release did not help at all in terms of creating trust and confidence among investors. This means that the steep decline in Twitter could easily turn out to be a buying opportunity in the middle and long term.

On the other hand, Twitter is priced for demanding expectations, so management needs to find a way to deliver sustained ad engagement and revenue growth for Twitter to be able to deliver consistent gains for investors in the future.