Sometimes great investments can be found among the most hated stocks on Wall Street. The short term, quarter to quarter mentality of so many investors out there means that some companies that are hitting a rough patch but have great long term prospects are selling for huge discounts. Then again, these hated stocks could be hated for legitimate reasons.

5) Transocean (NYSE:RIG), 30.5% of shares sold short: Transocean has been on the wrong side of a few industry trends as of late. First, there is the fact that it's very hard for oil and gas producers to justify the high costs of offshore oil and gas development, so demand for Transocean's rigs -- along with those of its competitors -- is weak. Also, a large supply of brand new rigs that rig companies ordered years ago under better conditions are just now hitting the market, which, combined with the existing fleet of rigs, has created an oversupply. Finally -- and this is more specific to Transcoean -- some of its rigs are old and do not meet the specifications that many producers are looking for when looking to explore for oil.

Hopefully, new CEO Jeremey Thigpen can start to turn things around by pushing through the pain of retiring older assets and finding work for the company's new ones, but based on today's market for offshore rigs there is a chance that the company could continue to struggle for some time.

4) U.S. Silica Holdings (NYSE:SLCA), 31.2% of shares sold short: As a provider of sand used in hydraulic fracturing fluid, today's market looks pretty rough. Shale drilling in the US can be pretty quick to react to changing prices since the time to drill a new well can be measured in less than a week, so as the price of oil has dropped and stayed relatively low, drilling activity has ground to a halt, as seen in this chart showing active drilling rigs in the Iower 48 states. 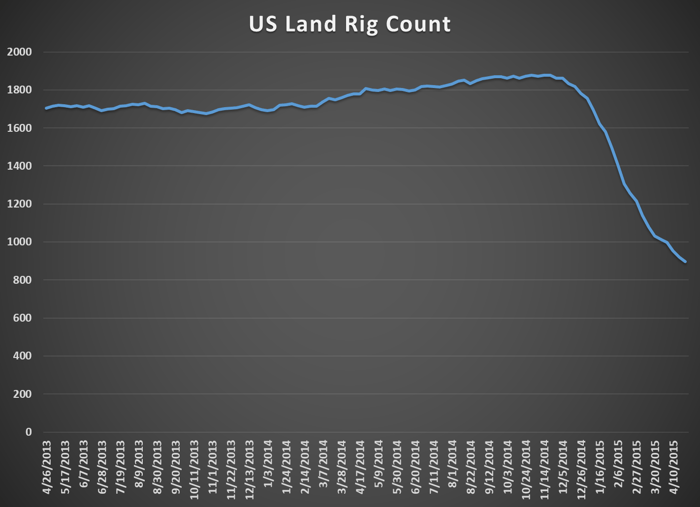 So much of US Silica's success is tied to total drilling activity in the US, and with such a drastic reduction in rig count the total amount of wells needing sand for frack jobs is getting smaller by the day. US Silica is slightly protected because it has some strong supplier contracts and its financial house is in decent order, but as long as oil prices remain where they are there won't be many new wells needing US Silica's sand.

3) Comstock Resources (NYSE:CRK), 31.6% of shares sold short: If oil and gas prices were in better shape than they are today, then perhaps the holdings at Comstock would look much more promising. Its current assets are producing assets in both the Haynesville-Bossier and Eagle Ford Shale, as well as prospective acreage in both the Eastern fringes of the Eagle Ford and the Tuscaloosa Marine Shale. 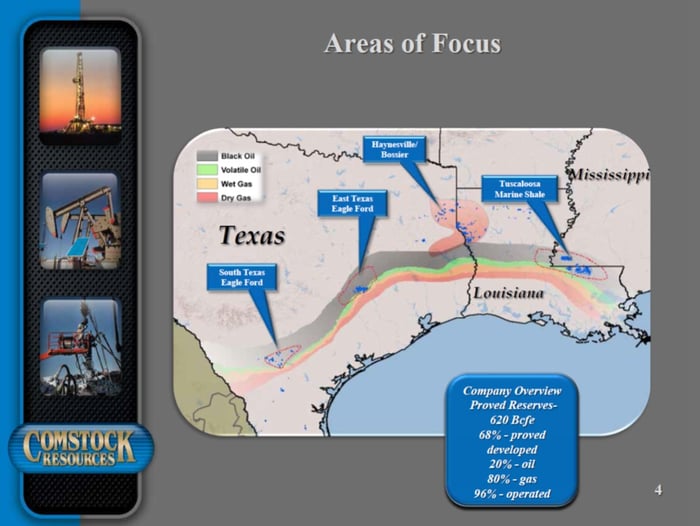 While the company could eek out some small profits from its producing assets, there isn't a whole lot of extra spending available for development of its prospective shale formations. The company's 2015 budget calls for zero new wells in these new regions, but it will have to spend money for leaseholds on what is essentially dead acreage as long as prices are where they are today. With cheap prices and production expected to decline in 2015, it's going to get harder and harder for the company to keep its balance sheet in order.

2) Tidewater (NYSE:TDW), 31.9% shares sold short: Of the companies on this list, an argument could be made that this is the least deserving. Tidewater owns and operates a fleet of vessels that support offshore rigs, transporting materials and towing rigs into place. Yes, activity for Tidewater's services is expected to slow significantly as the price of oil sinks its teeth into the capital spending of oil and gas producers, but Tidewater has the advantage of not only having the largest fleet in the business -- which gives it some pricing power -- but also being one of the newest, which means it will be able to handle bigger towing and support roles. The company's returns on capital are decidedly weak compared to those of many other oil services companies in the space, but the company's finances are in pretty good shape, and Tidewater should be able to ride out the bad times.

1) Carbo Ceramics (NYSE:CRR), 35.4% of shares sold short: Carbo Ceramics is very much in the same boat as US Silica, although the company doesn't build ceramics exclusively for the oil and gas sector. It made some very large bets on supplying the shale revolution with ceramic proppant to be used in place of sand for frack jobs. As if the recent decline in drilling activity wasn't enough of a downer for the company, other trends in the industry are making it worse. The original value proposition for using ceramic proppant instead of sand was that ceramics were believed to be stronger and could handle the pressures in a shale formation better, resulting in better well performance even though ceramic was costlier than sand. However, many companies are finding now that by just adding more sand than once thought possible, they are able to achieve better well economics without the higher costs of ceramics. This doesn't bode well for Carbo, and unless it can start to make a push with its other services, such as fracture simulation software and fracture design, the company could find itself permanently on the wrong end of the industry trends.