Amazon.com (NASDAQ:AMZN) stock recently soared after the e-commerce giant beat analyst estimates on the top and bottom lines with its first-quarter earnings report. Yet the real highlight of that earnings report was revenue from its Amazon Web Services, or AWS, business, which it disclosed for the first time.

Prior to that disclosure, Amazon's AWS unit -- which consists of cloud servers, cloud services, and online file storage solutions -- was a mysterious one that could only be measured by analyst estimates. Now that Amazon has finally provided some solid top- and bottom-line figures, let's see how well it stacks up to its rivals in the cloud.

1. How AWS measures up to IBM and Microsoft
During the first quarter, AWS revenue rose 49% year over year to $1.57 billion with an annual run rate of $6 billion. That makes it larger than "cloud as a service" businesses at IBM (NYSE:IBM) and Microsoft (NASDAQ:MSFT).

IBM reported that its cloud revenue rose 60% annually to $7.7 billion last quarter. However, a large portion of that came from "hybrid cloud" installations that include both hardware and software. IBM's cloud as a service business, which competes directly against AWS, only had an annual run rate of $3.8 billion.

Microsoft reported that its cloud revenue last quarter rose 106% year over year with an annual run rate of $6.3 billion. However, that total includes software as a service apps including Office 365 and Dynamics CRM, which aren't directly comparable to AWS. Microsoft's cloud-based service Azure directly competes against AWS, but its official revenue figures have not been made public. However, Deutsche Bank analysts recently estimated Azure generates $500 million to $700 million in annual revenue, making it roughly a tenth the size of AWS.

2. A profitable business
Amazon Web Services is also a profitable business. Last quarter, its operating income rose 8% year over year to $265 million, and it's on track to top $1 billion in annual profit. That gives the unit an operating margin of nearly 17%, which is well above the industry average.

By comparison, cloud and Web hosting company Rackspace (NYSE:RAX) posted $1.79 billion in revenue last year and had an operating margin of about 9%. Neither IBM, Microsoft, nor Google (NASDAQ:GOOG) (NASDAQ:GOOG) disclose the operating profits of their cloud businesses.

3. Plenty of growth potential
Based on AWS' previous growth rate, it could achieve an annual run rate of $7 billion by the end of the year. That would account for nearly 7% of its projected annual revenue of $103 billion for fiscal 2015.

Amazon is investing heavily in AWS to maintain that growth. In 2014, over $6 billion of the $17 billion in property and equipment on Amazon's books were dedicated to AWS -- an 86% year-over-year increase from 2013. At the end of last year, AWS was serving over 1 million customers from roughly 1.4 million servers. That equaled more than $3,300 in revenue per server in 2014. 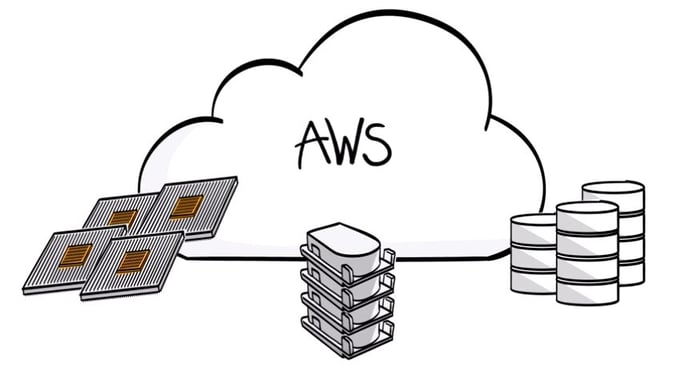 Amazon has introduced plenty of new services to boost the appeal of AWS. It introduced Lambda, a development tool that helps developers easily write cloud-based apps. It offers cold storage, which lets users back up massive amounts of data for about $0.01 per gigabyte. It introduced "machine learning" to offer predictive analytics services to its enterprise customers, a need that IBM's Watson Analytics, Microsoft's Azure ML, and Google's Prediction API already address. Amazon also launched a cloud-based marketplace for AWS desktop apps, which lets enterprise users access virtual apps from a central location.

The key takeaways
Research firm IDC expects global spending on public cloud services to surge from $56.6 billion in 2014 to $127 billion by 2018. Amazon is poised to profit from that growth, thanks to its solid reputation for data hosting and big investments in AWS. That growth will bolster Amazon's bottom line even as pricey new investments in its core e-commerce business and currency headwinds impact margins.