Internet bank superstar BofI Holding (NYSE:AX) reported its third-quarter results on April 30, and it was yet another fantastic quarter of record profits and growth. Let's take a closer look at the key metrics for evaluating the company's results: growth of its loan portfolio, growth in deposits, and per-share earnings growth.

Loan portfolio crushing it; deposit base growing like wildfire
Bank of Internet's loan portfolio is its Hope Diamond: big and valuable. But unlike the Hope Diamond, which unfortunately stays the same size, BofI Holding has done a remarkable job of growing its loan base over the past few years. The bank's loan portfolio grew by 49.7% compared with the end of March 2014 and was the primary driver behind the 35% growth in net interest income, to $50.6 million in the quarter.

At the same time, deposits are also really growing, up 52% over the same period. Both the loan portfolio and deposits have grown more than $1.5 billion since March 31, 2014. The average deposit account balance has gone up over 80%, and business account deposits now make up more than half of total deposits.

And that's driving bottom-line and per-share earnings growth
Net income came in just over $21 million, up 44% from last year. Furthermore, most of that earnings growth is not coming at the expense of shareholder dilution, as earnings per share increased 35%, even with the share count up about 7% over the past year.

The key here is deposit growth. Over the past couple of quarters, BofI's deposit portfolio has grown at about the same rate as loans, meaning the company doesn't need to raise as much capital via stock sales to issue loans with. This trend is really important to investors, because the lifeblood of its growth is growing that loan portfolio.

And the lifeblood of shareholder value is growing earnings per share, which means we really want to see those deposits keep growing, and for stock offerings come to a halt as soon as possible: 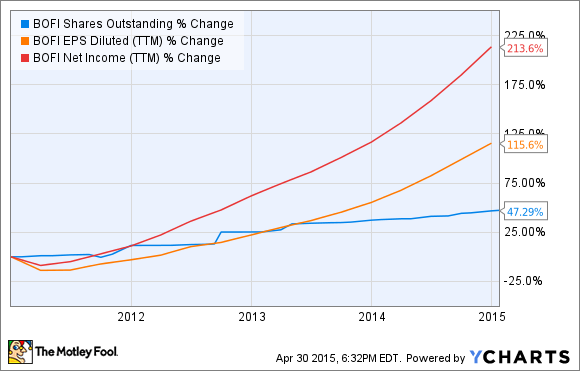 Net income has skyrocketed since going public, but all of the dilution -- which was necessary to generate capital in the past -- meant earnings per share grew at only half the rate of total earnings growth. Growing deposits is a major factor in reducing the need for share offerings going forward.

H&R Block deal waiting on approval
First announced more than one year ago, BofI Holding's deal with H&R Block to become the bank for H&R Block's financial services is now pending regulatory approval. This deal is expected to generate $26 million to $28 million in annual revenue and fee income and also add to its deposit base.

The deal originally was expected to close before this past tax season, but that clearly didn't happen. Chances are -- because of the nature of much of H&R Block's tax-season business -- much of the benefit of this transaction won't hit BofI's bottom line before 2016's tax season.

There are risks, but overall it was a solid quarter
BofI Holding does face some risks, as it focuses heavily on non-conforming "jumbo" loans, and largely in California. The potential for increased interest rates could slow activity for these higher-priced loans, which could lead to a deceleration of the rate of growth.

It's also worth keeping an eye on the bank's non-performing-loans metric, which measures loans in or near default status. At 0.72%, it increased from 0.6% a year ago. However, it has fallen sequentially, down from 0.8% in the second quarter.

Overall, it's hard to call the result anything but positive, even if the stock did fall 1% during trading the day of the release. The management team at BofI continues to do a solid job of growing the key metrics, and it seems as if it's managing the risks (so far) relatively well, though it's had a relatively strengthening economy to operate in since going public.

Bottom line? Solid execution and really impressive growth. It's hard to argue against that.