Investors were expecting the oil crash to pound ExxonMobil's (NYSE:XOM) earnings, and in that context the company's latest results didn't disappoint. Yet Exxon's results blew Wall Street's expectations out of the water. Find out why this was largely a Pyrrhic victory and why none of that matters in the face of three things that long-term investors need to focus on instead.

Exxon far surpassed Wall Street's lowball estimates in both sales and earnings per share. However, this quarter's blowout was due more to Wall Street's excessive pessimism about low oil prices than about any actual good results. Sales declined 36% year over year while earnings plunged 44% because of low crude and gas prices.

Upstream takes a beating
Not surprisingly, Exxon's upstream -- its production segment -- was the culprit, with earnings declining 66% to $2.9 billion. This segment's terrible results were aided by a $590 million benefit from positive tax effects, a 2.3% increase in global production -- to 4.248 million barrels per day of oil equivalent -- and a higher mix of oil to natural gas.

The U.S. division of this segment swung from a $1.3 billion profit last year to a $52 million loss, with all the earnings coming from Exxon's overseas operations. This outcome probably confirms that the company's American production costs are higher than overseas operations -- most likely because of its shale production -- which potentially explains why U.S. oil-rig rates have crashed so fast and so far as shale producers hurry to pull back on new drilling operations in the states.

Downstream picks up the slack
Not surprisingly, low oil prices boosted Exxon's refinery margins, with earnings from this segment doubling to $1.7 billion, despite flat product sales and $260 million more in maintenance expenses. The excellent results from the refining arm of the company came entirely from overseas, with U.S. refining earnings declining 10% while non-U.S. refining profits exploded by 479%. The poor showing in the U.S. was probably due at least in part to the explosion at the company's Torrance, Calif., refinery in February.

Meanwhile, the company's chemical division didn't do much to help the underlying results, with earnings declining 7% to $982 million thanks to an increase in margins and an improved product mix that were more than offset by a stronger dollar and a slight decrease in sales volume.

Three things investors should focus on instead
The integrated oil and gas industry is a long-term business in which any single quarter's or even a single year's results aren't all that important. Rather, investors should focus on three things that will affect their investment's long-term success: the company's overall profitability plan, its buyback program, and the safety of its dividend.

Exxon's profitability plan
This quarter, Exxon was able to raise production 2.3%, as major projects in Russia, the Gulf of Mexico, and Angola came online. Simultaneously, it cut capital expenditures by 9%, to $7.7 billion. This is part of the company's long-term plan to raise production 7.5% to 4.3 million barrels per day by 2017 while cutting spending on exploration and drilling. For example, Exxon expects to trim capital expenditures $4.5 billion, or 12.5%, in 2015 alone, indicating that it will have to cut costs more aggressively in the next three quarters to reach that target.

Buybacks fall to their lowest level in five years 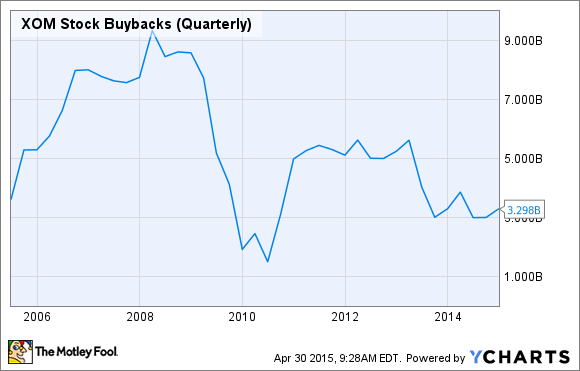 Because Exxon is a slow growth company that generates a mountain of free cash flow but has highly cyclical earnings, reducing its share count is an important component of achieving consistent earnings-per-share growth over time. It's also important to maintain a safe and growing dividend -- which studies show is one of the best ways for management to help achieve long-term shareholder profits.

This quarter, management spent $1.8 billion on buybacks -- the lowest level since 2010 -- $1 billion of which was to buy back 20 million shares, or about 0.5% of the shares outstanding, and it put $800 million toward buying back shares in conjunction with the company's stock option program.

Management is guiding for around $1 billion per quarter in share-reduction buybacks for Q2. Investors should keep an eye on how much management is spending on buying back shares to offset stock options, since this quarter 45% of the buyback funds went toward that purpose.

The dividend is growing ... for now
The dividend increased 9.5% year over year to $0.69 per share; however, it wasn't covered by free cash flow, just like last quarter. In fact, operating cash flow and asset sales this quarter dropped 48% to $8.5 billion, with asset sales making up $500 million.

Takeaway: Ignore this terrible quarter and focus on the fundamentals
Despite the terrible quarter's results, Exxon has a solid long-term plan for increasing both production and profitability. Most importantly, it's committed to returning cash to shareholders. When oil prices recover, its free cash flows should make the cash return program sustainable once more.

ExxonMobil Earnings: Ignore the Monster Earnings Beat and Focus on These 3 Things Instead @themotleyfool #stocks $XOM Next Article
Current