Please ensure Javascript is enabled for purposes of website accessibility
Log In Help Join The Motley Fool
Free Article Join Over 1 Million Premium Members And Get More In-Depth Stock Guidance and Research
By Morgan Housel – May 1, 2015 at 12:20PM

Wisdom from Buffett and Munger

"Hang Out with People Who are Better than You"

Another memorable piece of wisdom that Buffett shared with Pabrai and Spier was this: "Hang out with people better than you, and you cannot help but improve." Over the years, Buffett has spoken eloquently about how much we're influenced -- both for better and worse -- by the people around us. In a fascinating interview with Gillian Zoe Segal, author of a new book entitled Getting There, Buffett warns: "If you hang around with people who behave worse than you, pretty soon you'll start being pulled in that direction."

In over your head

This stat about student loans is amazing:

Nearly one in three Americans who are now having to pay down their student debt -- or a staggering 31.5% -- are at least a month behind on their payments, new research from the Federal Reserve Bank of St. Louis suggests. That figure is far higher than official delinquency measures reported by the Education Department and the New York Fed. And it's also likely the most accurate.

Here's why: The official measures reflect delinquencies as a share of all Americans with student debt, but millions of borrowers aren't even required to make payments yet. Many are currently in college or grad school and thus don't have to make payments until six months after they leave. Others are out of school and past that grace period but have received permission by their lender -- the federal government in most cases -- to suspend payments for a range of reasons, such as being unemployed.

"The worst strategy ever"

Michael Batnick shows what would happen if "every time stocks drop five percent, you sell and wait for "clarity." ... Repurchase stocks when they are one percent higher than when you sold, just to make sure that the dust has settled." 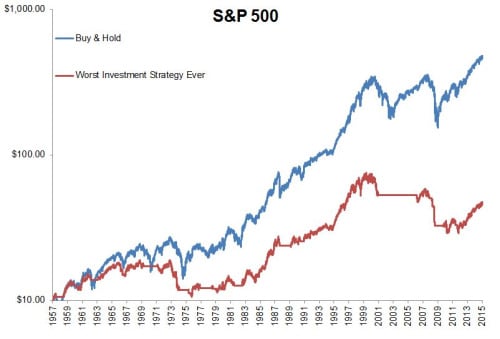 Josh Brown shows how frequently markets are in some state of upheaval: 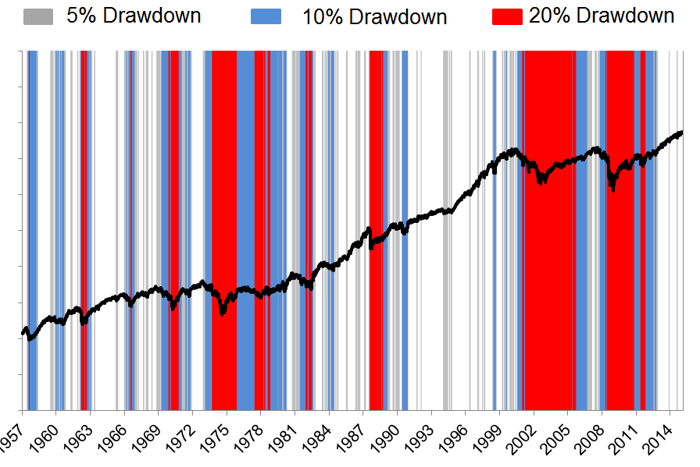 E-cigarettes are booming among young Americans:

About a quarter of all high school students and 8% of middle school students -- 4.6 million young people altogether -- used tobacco in some form last year. The sharp rise of e-cigarettes, together with a substantial increase in the use of hookah pipes, led to 400,000 additional young people using a tobacco product in 2014, the first increase in years, though researchers pointed out the percentage of the rise fell within the report's margin of error.

China's stock market is getting out of hand:

Blackrock CEO Larry Fink says corporations are being too generous to shareholders at the expense of long-term growth:

There is nothing inherently wrong with returning capital to shareholders in a measured fashion, as part of a broader growth strategy -- indeed, it can be a vital part of a responsible capital strategy. Nor are the demands of activists necessarily at odds with the interests of other shareholders; some activist investors take a longterm view and have pushed companies and their boards to make productive changes.

It is critical, however, to understand that corporate leaders' duty of care and loyalty is not to every investor or trader who owns their companies' shares at any moment in time, but to the company and its long-term owners. Successfully fulfilling that duty requires that corporate leaders engage with a company's long-term providers of capital; that they resist the pressure of short-term shareholders to extract value from the company if it would compromise value creation for long-term owners; and, most importantly, that they clearly and effectively articulate their strategy for sustainable long-term growth. Corporate leaders and their companies who follow this model can expect our support.

No confidence
Here's what a generation of low savings and poor investments will do:

The Insured Retirement Institute survey found that 27% of baby boomers are confident they will have enough money to last through their retirement, down from 33% a year ago and 37% in 2011. Only 6 in 10 boomers report having any retirement savings, down from roughly 8 in 10 in previous surveys.