Brian Stoffel, Dan Caplinger, and Jason Hall
(TMFCheesehead)
Author Bio
Brian Stoffel has been a Fool since 2008, and a financial journalist for The Motley Fool since 2010. He tends to follow the investment strategies of Fool co-founder David Gardner, looking for the most innovative companies driving positive change for the future. He also mixes in risk-management strategies he's learned from Nassim Nicholas Taleb. Follow @Brian_Stoffel_
Follow @Brian_Stoffel_

With the types of finances many Boomers have, a helping hand will be necessary in retirement.

As Baby Boomers enter their Golden Years, an enormous generational shift is occurring, the likes of which have never been seen before. Today's retirees can expect to live longer than any other before them. But for many a Boomer, their financial situation is far from perfect.

Those forces are combining to present a unique set of challenges for tomorrow's retirees. Recently, we asked three of our analysts to highlight some of these challenges. Here are their top three.

Dan Caplinger: (Low interest rates)
Low interest rates have been a huge problem that many Baby Boomers haven't been able to address in their investment portfolios. Throughout much of the past few decades, retirees could count on stable, reliable income of 5% or more from no-risk investments like Treasury bonds, allowing those with a basic asset allocation strategy splitting their portfolios between bonds and stocks to get the income they needed while having growth potential from their stock investments.

Now, low rates have forced Baby Boomers to make difficult choices. If they stick with conservative investments, they can't earn the income they need. If they move toward dividend stocks to get more income, though, then they take on more market risk that could threaten their principal in the event of a market crash.

With few signs of rate relief in sight, Baby Boomers will have to be extremely careful to understand the consequences of rising rates well in advance of any action from policymakers so as to avoid big capital losses that could endanger their retirement. At the same time, those who've been lucky enough to ride the bull market higher with their dividend stocks are sitting on nice gains in their portfolios, but it's important to recognize the higher risk levels and to take steps now to tone down that risk before it causes even bigger problems.

Jason Hall: (Still paying a mortgage)
One of the most concerning trends over the past decade has been the increased percentage of people over both 50 and 65 still paying a mortgage. According to a Harvard University study published in 2014, the rates have been increasing for years: 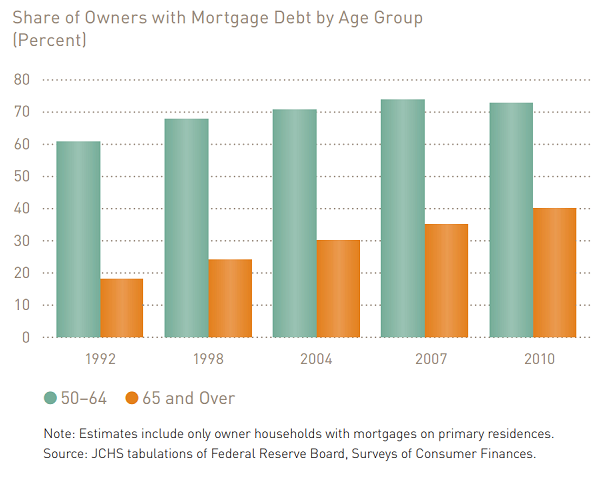 A report from the U.S. Consumer Financial Protection Bureau from earlier that year showed the same thing, reporting that the percentage of those over 65 with mortgage debt increased from 22% to 30% between 2001 and 2011, and even 21% those over 75 are paying a mortgage.

More troubling is the amount of debt owed by the median retiree has almost doubled to $79,000 over the period described. On average, retirees with a mortgage pay an extra $10,000 per year in housing costs versus homeowners without a mortgage.

Let's be clear: Mortgage debt isn't necessarily a bad thing, but the reality is, most people won't make anywhere close to the same levels of income in retirement as the years before. According to the Social Security Administration median annual income for a married couple 65 and older was $48,826 in 2012. That means, on average, a retiree with a mortgage must fork over a whopping 20% of their income to cover the extra housing costs versus their cohorts who paid their mortgage off.

That can be a significant burden, and keep you from having the kind of independent retirement you had hoped for.

Brian Stoffel (A tough market)
One of the biggest retirement challenges facing Baby Boomers is the simple fact that they don't have enough saved up. A release this month by the Employee Benefit Research Institute showed that 75% of those age 55 and older have less than $250,000 saved up for retirement.

To put this in perspective, using the 4% rule, a quarter-million dollar retirement fund would provide just $10,000 per year in living expenses. While Social Security can help augment that amount, it's still less than many are used to living on.

One of the reasons Boomers find themselves in this position is because of unfortunate timing in the market. Twice in the their prime working, saving, and investing years, Boomers have experienced enormous market tumbles. During the dot-com bust, the S&P 500 fell 49% -- and during the Great Recession, the dip was even more severe: 57%!

Confounding these unfortunate breaks was the fact that many pulled money out of the market at bottoms -- either because they were afraid of the volatility, or they needed the money to make ends meet. This meant that many missed out on some of the strongest bull markets we've ever seen.

To help remedy the situation, Boomers need to investigate how they can cut expenses while shoring up their savings. Selling a home to downsize, extending their working years, and considering multi-generational housing are all potential solutions to help Boomers make ends meet in retirement.