Please ensure Javascript is enabled for purposes of website accessibility
Log In Help Join The Motley Fool
Free Article
Join Nearly 1 Million Premium Members And Get More In-Depth Stock Guidance and Research
By Eric Volkman – May 2, 2015 at 9:20AM

Caesars Entertainment has the highest short interest among major casino groups, but is this a smart move?

Let's limit ourselves to a single one: There's a lot of action betting against the company just now. Put in a more straightforward way, many investors are shorting its stock. Here are some of the key reasons.

Not standing tall
According to statistics from NASDAQ OMX(NDAQ -0.03%), at the end of last month, short interest in Caesars Entertainment stock amounted to 14.6 million shares. 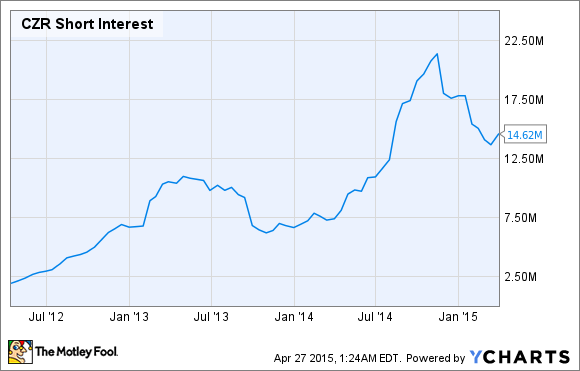 That's roughly 10% of total shares outstanding, which is high for the casino business. By comparison Las Vegas Sands (LVS 1.19%) stood at around 3%, while the figure for Wynn Resorts (WYNN) was 5%. The only number that approached Caesars' was MGM Resorts International's (MGM 0.77%) nearly 9%.

In many ways, it's surprising that Caesars' rate isn't higher. The company is, to put it bluntly, a mess.

Instead, it's recorded a series of deep bottom-line losses that, in one fiscal year, approached $3 billion.

Helping to pull the company far underwater is a mass of debt totaling over $20 billion. In 2014, Caesars' interest expense alone was over 30% of its total revenue.

Meanwhile, a rather opaque corporate structure doesn't help to inspire confidence in the company. Caesars operates via a set of four "consolidated entities." Together with the related -- but separately traded, for the moment -- Caesars Acquisition (NASDAQ: CACQ), they form a confusing web of cross-shareholdings.

One of those units, Caesars Entertainment Operating Company (CEOC), filed for Chapter 11 bankruptcy this past January.

As is appropriate for a company being squashed by its debt, Caesars is putting assets up for sale. In February, the company announced it had sold its 20% interests in three facilities in Ohio, as well as partial ownership in two buildings in the state, and a controlling interest in a Kentucky race track.

Yet, in a puzzling move, soon afterwards, Caesars announced it would contribute over $80 million to a new $126 million convention center in Atlantic City. To say the one-time New Jersey gambling mecca's glory days are long behind it is a gross understatement; it's hard to imagine it'll attract much convention business anytime soon, if ever.

Property rich
Not all is grim for Caesars Entertainment. The company hasn't been very effective in growing business from its assets, but it sure has a lot of them.

In its last annual 10-K filing with the SEC, the company listed nearly 50 assets. Several are located on choice real estate on the Las Vegas Strip. So, even if sold at fire-sale prices, they could theoretically bring in plenty of cash to help the company claw out of its financial hole.

Additionally, the CEOC bankruptcy seems to be a useful work-around that avoids full-scale bankruptcy for the entirety of Caesars Entertainment. If the company can find a way to restructure the unit's debts without losing major assets or getting tangled in bitter legal fights with creditors, it might be able to muddle through.

Regardless, the big casino operator with the Roman name is going to have a tough time overcoming its present struggles. That current bet on 14 million-plus shares says its chances aren't brilliant.