Please ensure Javascript is enabled for purposes of website accessibility
Log In Help Join The Motley Fool
Free Article Join Over 1 Million Premium Members And Get More In-Depth Stock Guidance and Research
By Todd Campbell - May 3, 2015 at 2:07PM

Warren Buffett's "great companies at a fair price" mantra may mean that it has become tougher for the Oracle to find bargains.

Warren Buffett cut his investing teeth while working alongside value investing champion Benjamin Graham, and as a result, Buffett spent the early years of his investing career focused intently on finding insanely cheap stocks, regardless of the underlying company's long-term prospects.

Although that strategy proved to be mostly successful, lessons learned over decades of investing led Buffett to refine his strategy to focus less on buying cheap stocks and more on buying great companies at fair prices. Buying top-notch companies at fair prices is the best way to ensure long-term success in investing, and it has allowed Buffett to cobble together a conglomeration of companies that is the envy of its peers.

But has the market become so pricey that there are no good deals left to be had? Let's use one of Buffett's favorite indicators, the price-to-book ratio, to find out.

Valuing the market
In his 2014 letter to shareholders, Buffett said it was a risky proposition to buy shares in any company -- even his own -- when shares are overvalued. The Oracle of Omaha noted that buying Berkshire Hathaway when it trades at an unusually high valuation, such as double its book value, could mean waiting years before realizing a profit.

On the surface, that admission indicates that Buffett might not think that the S&P 500 is the slam-dunk buy it was a few years ago.

Buffett has said in the past that a price to book ratio of 1.2 or lower would indicate to him that it makes sense to buy back shares in Berkshire Hathaway. Based on Buffett's comments on valuation and his policy on buybacks, it stands to reason that Buffett prefers companies with P/B ratios near 1 and that he'd typically view a P/B ratio of 2 or higher as a bit rich.

Drilling down to great companies
The market may not be as compelling of a buy as it once was, but there are still some individual companies that could pass muster with the Oracle of Omaha.

For example, a host of insurers and banks with globally recognized brands trade at P/B ratios near 1, including Bank of America, which is Berkshire Hathaway's fourth-largest position thanks to options Berkshire got in a deal Buffett made with the bank at the height of the financial crisis.

Another example of a great brand at a fair price could be Honda Motor Company (HMC 1.39%). Honda is a globally recognized automaker that has seen its trailing 12-month sales jump from less than $90 billion back in 2010 to $115 billion last year. Honda also boasts a P/B ratio of just 1.07. 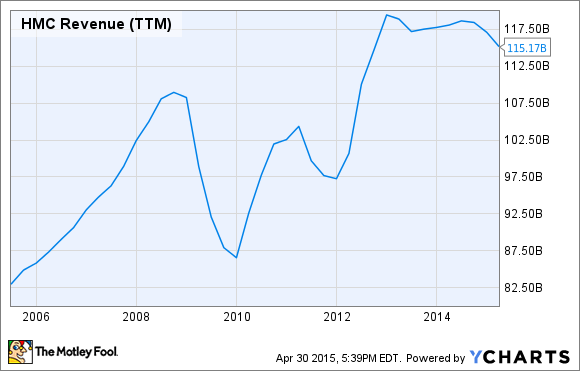 Tying it together
Buffett is always hunting for great companies trading at bargains. And although finding such compelling buys has become more difficult, it's far from impossible.

In March, Buffett announced that Berkshire Hathaway is buying foods giant Kraft to fold into its Heinz business, and last November, Buffett bought Duracell from Proctor & Gamble.It's unlikely that Buffett would have acquired those businesses if he didn't think he was paying a fair price, so those deals suggest that -- at least in Buffett's eyes -- there are some businesses selling for compelling valuations.

The Surefire Investment Warren Buffett Wants You to Make