Why Exxonmobil, Chevron, Conocophillips, and Schlumberger have been energy's blue chip stocks for so long.

The term "blue chip stock" carries a lot of weight to the individual investor. It is a sign of trust that the company can be held on to as an investment for years with little worry that you will lose money over the long term. You can find a true blue-chipper in just about every industry out there, even volatile commodity industries such as energy.

Granted, the definition of a blue chipper in the energy space may be slightly different than the traditional blue chipper, but they none the less fit the bill. Let's take a look at what is likely the best way to define a blue chip stock in the energy space and look at four companies that fit the description: ExxonMobil (NYSE: XOM), Chevron (NYSE: CVX), ConocoPhillips (NYSE: COP), and Schlumberger (NYSE: SLB)

What is an energy blue chip stock?
Traditionally, the definition of a blue chip stock is not just a large company that provides stability for investors, it normally means that profits are going to grow at a reasonable, predictable rate as time goes on. Since energy is a commodity that goes through cyclical price swings, it is close to impossible for a company in this space to grow like clockwork.

So instead of relying on the traditional definition of a blue chip stock, we're going to create a slight variation for energy companies. Instead of focusing on consistent earnings growth, we're going to instead use consistent dividend growth -- basically, no dividend cuts. In the world of commodities, growing a dividend may not always be possible, but at least maintaining a dividend without needing to cut it is a good indication of the company's overall strength in the market. Over the past 25 years, only a small handful of energy companies have been able to accomplish this feat, and the four companies mentioned above have been the most successful at doing this. 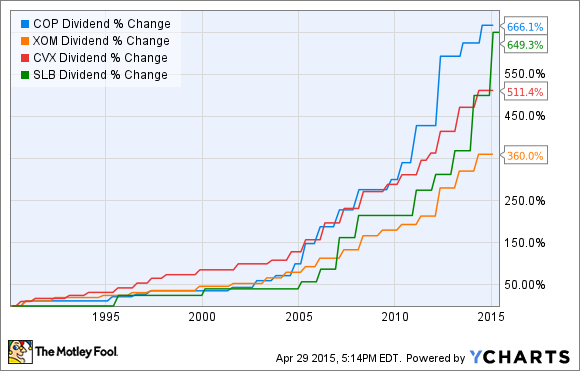 Energy's Blue Chippers
The reason that these companies have been able to do over this long period that almost no other oil companies have been able to do is consistently create more cash flow from their operations than what they have spent on capital expenditures. Having all this excess cash lying around has enabled management to not only increase dividend payments, but it has also allowed these companies to pursue other shareholder friendly initiatives such as share repurchases.

Even though Schlumberger stands out as the only company on this list that isn't an integrated oil and gas company -- ConocoPhillips became a pure exploration and production company just a few years ago when it spun off Phillips 66 -- they all share one common trait that allows them to be consistent capital creators: size and scale. With hundreds of billions of dollars worth of assets, ExxonMobil, Chevron, and ConocoPhillips size gives them almost unprecedented access to cheap capital. In fact, ExxonMobil's AAA credit rating is one of only three U.S. companies with that designation. Heck, the U.S. government doesn't even have that solid of a credit rating. Access to cheaper sources of financing translates to both higher returns and the ability to pursue development projects on a massive scale. This has been the modus operandi for these companies for years, and the long-term demand for oil will allow these companies to leverage these traits for several more years to come

Schlumberger, as the worlds largest publicly traded oil services company, has a couple things going for it compared to many of its peers. First, its immense market share and constant development of new technology for the exploration and development of oil and gas gives it strong pricing power that prevents some of its services from being commoditized by the competition. Also, unlike other large oil services contractors, it has focused much more of its attention on the international market rather than the North American market. Regions outside North America have a tendency to run on longer term service agreements, making revenue and earnings much more predictable. These traits have allowed Schlumberger to generate superior returns compared to its peers.

What a Fool believes
Of course, all of these companies have seen earnings go up and down with the price of oil and gas, but their competitive advantages have allowed them to stay ahead of the curve in the industry and continue to reward shareholders with ever growing dividends. If you are looking to a long term blue chip stock, you can't ask for much more than that.