Please ensure Javascript is enabled for purposes of website accessibility
Log In Help Join The Motley Fool
Free Article Join Over 1 Million Premium Members And Get More In-Depth Stock Guidance and Research
By Tyler Crowe - May 5, 2015 at 12:35PM

Oil prices are increasing, but that isn't necessarily a good thing for Key right now.

What: Shares of Key Energy Services (KEG 0.00%) jumped as much as 10% in early morning trading. While there was no direct company news, investors appear to be cheering the energy sectors as a whole since the price of West Texas Intermediate crude increased to over $60 per barrel. 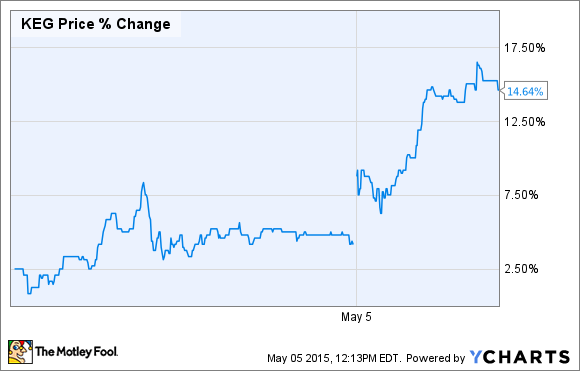 So What: In some ways, this surge in stock price doesn't really make sense. The reason that oil prices are rising is because oil inventory levels are not increasing as quickly as they were several weeks ago. This suggests that overall drilling activity is slowing, which is not good for Key since it is an oil services company that relies on overall drilling and service activity rather than prices themselves. So it may be very possible that Wall Street or other investors are making broad stroke assumptions about the energy market and not looking deeper at the drivers of individual companies.

A small twinge of hope may be tied to the fact that some of Key's production enhancement services will pick up faster than other oil services segments since it is a quicker, cheaper way to boost production for producers, but that remains to be seen.

Now What: Key Energy Services is doing what it can to remain profitable during this downturn in the oil market. It is exiting its international division to focus on production enhancement in the U.S. An improvement in oil prices may help in the long run as producers start to become a little less shy about spending on new wells and improving performance at existing wells, but that could take a little while longer as the U.S. rig count continues to decline.

These George Soros Stocks Are Losing Big So Far in 2017

Why Key Energy Services Inc (KEG) Stock Was Up 10% Today

Why Key Energy Services Inc (KEG) Stock Was Down 10%

Why Key Energy Services Inc (KEG) Stock is Down 12%