Please ensure Javascript is enabled for purposes of website accessibility
Log In Help Join The Motley Fool
Free Article Join Over 1 Million Premium Members And Get More In-Depth Stock Guidance and Research
By John Maxfield - May 6, 2015 at 8:08AM

It's time for the hunter to become the hunted. The executives at New York Community Bancorp (NYCB 4.35%) haven't been shy during the last few years about their interest in pursuing a "transformative" acquisition. But the bank's concentrated focus on a specific niche market -- namely, financing the ownership of rent-controlled, multifamily apartment buildings in the New York City metropolitan area -- seems to make it a more suitable acquiree than acquirer.

Since going public two decades ago, New York Community Bancorp has generated one of the highest returns in the bank industry. If you factor in both its share price appreciation and its generous dividend payout, it has produced a total shareholder return of 3,630% -- or nearly twice that of U.S. Bancorp, arguably the best-run big bank in the country. 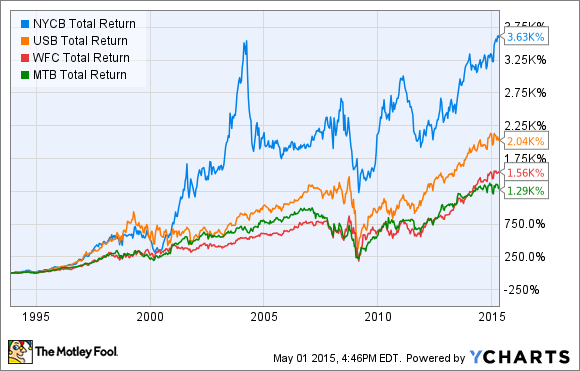 New York Community Bancorp has achieved this by pursuing a strategy of growth by acquisition. During the last decade-and-a-half, the company has purchased roughly a dozen banks. Most of these added to its stronghold in and around New York City, but more recently it has expanded by purchasing once-ailing lenders in Ohio and Arizona.

To date, it's hard to argue with New York Community Bancorp's strategy. It was one of the few multibillion-dollar banks in the country to sustain its dividend payout throughout the financial crisis. That's because New York Community Bancorp, unlike most of its peers, experienced minimal loan losses, even at the nadir of the downturn, thanks to the resilience of the underlying collateral (apartment buildings insulated by rent-control legislation) and the prudence of its underwriting. It's for these very reasons, however, that current and prospective investors should be suspicious of New York Community Bancorp's further expansion into non-core markets. Indeed, the reason its business model works so well is that its focus on large loans allows it to achieve unusually potent economies of scale. Last year, its expenses accounted for a mere 43% of its net revenue, compared to an average of 63.5% for the industry at large. Additionally, by specializing in New York City's highly coveted rent-controlled properties, there's a comparatively small risk that its borrowers won't have sufficient cash flow to pay their obligations.

By venturing into Ohio and Arizona, New York Community Bancorp is effectively diluting these competitive advantages. Its banks in these far-flung states are standard lenders, collecting deposits from consumers and then lending the funds to businesses and prospective homebuyers. It isn't a bad model, but it's nowhere near as safe or as lucrative as New York Community Bancorp's bread-and-butter multifamily lending. Another transaction in this direction -- particularly a "transformative" one -- would fix something that isn't broken.

This isn't to say that New York Community Bancorp shouldn't be pursuing some type of deal. Looking at its financial statements, any experienced bank analyst would tell you that its biggest opportunity is in securing consumer deposits, which cost next to nothing in terms of interest expense. New York Community Bancorp, on the other hand, relies on higher-yielding brokered deposits. As a result, its cost of funds in the first quarter of this year equated to 1.37%, compared to only 0.55% for U.S. Bancorp and 0.26% for Wells Fargo.

In light of this, there's little doubt that New York Community Bancorp could unlock value through a deal that, in one fell swoop, gives it access to $20 billion or so of cheap financing. But the problem is that such a deal would, almost by definition, entail a sprawling (and highly cost-inefficient) branch network. Given this, it isn't unreasonable to think that a more ideal solution would be for a large bank that already has a copious amount of cheap funding and a distinguished history of running an efficient branch network -- say, Wells Fargo or U.S. Bancorp -- to purchase New York Community Bancorp. In this case, it may be in the hunter's interest to become the hunted.