What: Shares of Valero Energy (NYSE:VLO) declined by just over 10% in April, in part because of speculation that oil prices were going to drop, only to fall even further when the price of oil increased. 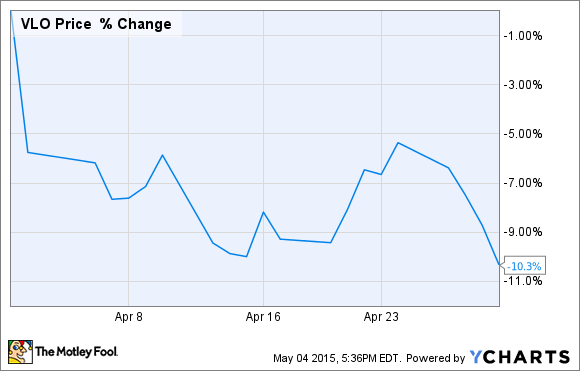 So what: It sounds pretty weird that a company's prospects can look dreary when oil prices go in either direction, so let's put both into context. At the beginning of the month, many investors were apprehensive about the future of oil stocks, because negotiations between the West and Iran could lead to a lift of sanctions regarding oil exports from Iran, which could further the glut of oil going to market. This, however, was more a reflection of bearishness across the entire energy sector and not Valero itself, because cheaper crudes would mean cheaper feedstock for the company's refineries.

The more problematic issue for the company, though, has been the recent increase in oil prices that hasn't necessarily correlated with an increase in gasoline prices. 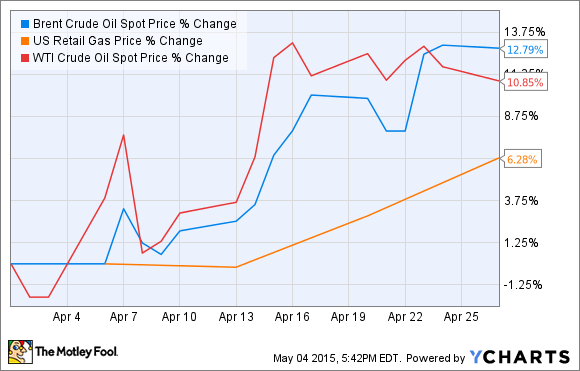 This is important, because Valero's entire business is based on the crack spread, or the difference in price for the refined products such as gasoline and the cost for the crude it uses as feedstock. If feedstock costs outpace refined product prices, it can squeeze margins at any refiner.

Now what: It's almost pointless to extrapolate the movement of oil and refined products based on what happens in one month. Movement by crude and gasoline could hurt margins at Valero this quarter, but it's certainly not enough to break the company. The company's first-quarter results showed a vast improvement over this time last year, and it will take a much more significant increase in crude prices before investors should consider shying away from one of the nations top independent refining companies.