Shares of cyber security vendor FireEye (NASDAQ:FEYE) have risen significantly since last October, and are now up more than 50%. Demand for FireEye's services remains intense, and the company's recent earnings reports have exceeded expectations.

But even after such a significant move, FireEye remains a compelling stock and an interesting buy. If it can continue to execute, FireEye's best days still lay ahead of it.

It expects to keep growing
Most of the interest surrounding FireEye has centered on its growth: in contrast to more established cyber security firms, FireEye is growing rapidly. Last year, for example, FireEye's revenue rose a staggering 163% on an annual basis. FireEye likely can't continue that sort of outsized growth, but its business should continue to expand rapidly. In its fiscal second quarter, management expects both FireEye's revenue and its billings to rise by about 50% on an annual basis.

The market for FireEye's services is still to a certain extent in its infancy. FireEye spends a lot on sales (it expects to spend around 64%-68% of its revenue on marketing and sales this year) largely because its customers are ignorant of its offerings. This may seem like a knock on the company, but it serves to highlight the long-term growth potential of FireEye's business.

It's dominating its market
FireEye sells a sort of cyber security that's relatively new and novel. FireEye focuses on advanced persistent threats -- the sort of attacks orchestrated by organizations and even governments against particular targets -- and zero-day attacks. Traditional cyber security offerings are largely ineffective at stopping these sorts of exploits, creating real demand for FireEye's products.

While more traditional forms of cyber security are accounted for in the budgets of IT departments, advanced persistent threat prevention is often not included. FireEye must convince firms that they need its offerings, which is a challenge, but also an opportunity. The possible size of FireEye's total addressable market remains open to debate. Some analysts are skeptical of the company's claim that its market size is as much as $30 billion, but if that's the case, FireEye's annual revenues could grow several thousand percent in the years to come.

Advanced persistent threats appear to be growing in severity and in frequency. Unfortunately, some firms have been devastated by them in recent months, attracting significant media attention. The attack on Sony Pictures, for example, stands out as the prime example, while Target's 2013 stolen credit card fiasco is another.

FireEye isn't alone in selling a solution to this problem, but it does appear to be playing a dominant role in the market. In a recent research report, analysts at Raymond James reported that, in their interviews with customers, FireEye's products are widely recognized as the best in class. In 2013, FireEye discovered 11 zero-day vulnerabilities, more than all of its competitors combined.

It's cheap on a relative basis
And while FireEye is up significantly since October, its stock is actually fairly cheap relative to its recent past. FireEye stock is down significantly from March, 2014, for example, when shares briefly zoomed into the $80 range. Although FireEye's share price has fallen since then, its business has improved meaningfully.

Unfortunately, FireEye isn't profitable, so it can't be valued with traditional metrics, like price-to-earnings. But on a trailing price-to-sales basis, it's trading at around 12 times, near an all-time low for the stock. It's also cheaper than other speculative cyber security firms: Palo Alto Networks, for example, is currently trading at more than 15 times trailing sales. 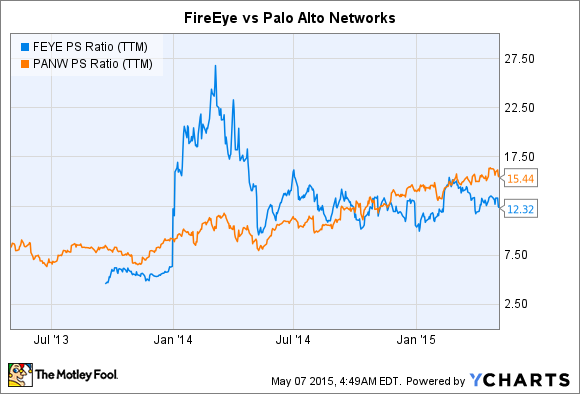 FireEye's business may just be getting started, and its stock has never been a better buy. Admittedly, its lack of profits make it a speculative play, but for those interested in FireEye, it's not too late to become a shareholder.