The United States is second only to China when it comes to installed wind power. Image source: Butz.2013/Flickr.

By now you have probably, at the very least, read a headline hinting at the high levels of air pollution in China. If you're an outlier, then consider that in October 2013 the city of Harbin registered a score of 1,000 on the Air Quality Index. The AQI has an upper limit of 500.

While a heavy reliance on coal power generation is to blame for "beyond limit" air pollution readings, there's no question that burning little black rocks also fueled the sharpest economic rise in human history. That means China now has two problems. First, it needs to curb air pollution to AQI scores of 25 to achieve levels deemed safe for humans. Second, it needs to achieve that daunting task while keeping a growing economy and swelling middle class chugging down the road toward increased prosperity.

China has committed to leveling off carbon dioxide emissions, curbing its reliance on coal, and doubling down on renewable energy sources such as wind and solar. Unfortunately, there's a big difference between installed capacity and power generation, especially for renewable energy resources located in remote regions that require expensive transmission lines.

Interestingly, American wind farm owners such as NextEra Energy (NYSE:NEE) and NRG Energy (NYSE:NRG) have dealt with similar issues in Texas and have benefited from relatively simple solutions. Will American wind wisdom translate into a successful outcome for Chinese ambitions?

Chinese wind by the numbers
China has big plans for solar power in the long term, but wind power will do much of the heavy lifting in the near term. The world's second largest energy consumer expects to have an installed capacity of 200 Gigawatts of wind power by 2020. To put that in perspective, that would represent roughly 40% of America's electricity needs today.

The good news is that China has a ridiculous amount of onshore wind potential -- as much as 543 GW of realistically accessible reserves from its five largest regions. The bad news is that a respectable majority of this potential resides thousands of miles away from the nation's population centers along the Eastern Seaboard.

First, consider this map of China's wind potential by region. Now compare that map with the next one, showing population density. I've added labels to China's top wind regions, which we'll further evaluate. 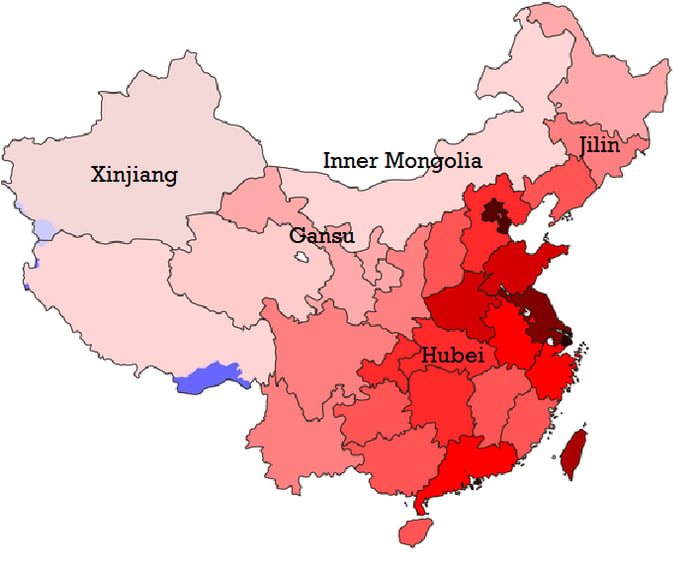 Finally, let's evaluate the wind resources China is expecting to develop in each region by 2020 and the estimated distance to Beijing (or closest major population center). I've added a column showing major cities at equivalent distances from New York City to put the distances in perspective.

Of course, just because regions are less populated than China's Eastern Seaboard doesn't mean they don't require power of their own (i.e., Xinjiang), and not all generation from the country's wind generation will be transmitted to Beijing. Rather, the comparisons are an attempt to show the unique challenges facing China's ambitious renewable energy goals.

Transmitting power long distances has indeed begun to hamper the country's targets and dilute the power generated through grid congestion. And as the population density map shows, China's wind resources are nearly all located in remote areas, meaning there isn't always a transmission line to easily tap into. In other words, Gansu may have 20 GW of installed wind capacity in 2020, but if grid installations don't keep pace, the effective installed capacity will be significantly lower. The result: These world-record wind farms could be mostly wasted.

Can China expand it's grid in parallel with its wind resources to meet its goals by the end of the decade? Success stories at NextEra Energy and NRG Energy, which faced similar hurdles in Texas, provide reasons for optimism and caution.

American wind wisdom
At 12 GW, Texas is home to more installed wind capacity than any other state. Yet most of the state's wind resources are located in the Northwest, while its population centers are located in the Southeast. (Sound familiar?) Lured by incentives, companies raced to build wind farms across the state in the mid-2000s. But the Texas grid couldn't handle all of the wind power generated, with the result that substantial amounts of wind power were wasted.

From 2009 to 2014, grid congestion was relaxed by over 3,500 miles of new transmission lines. So while installed wind capacity grew by less than 50% over the same time period, Texas was able to double wind power generation by more fully utilizing existing wind farms. That has benefited, and will continue to benefit, the largest wind players in the Lone Star State, such as NextEra Energy and NRG Energy, by allowing them to generate substantially more revenue from existing assets -- no additional investments required.

Can China pull a "Texas"?
It's obvious that China has plenty of wind capacity and is in dire need of reeling in air pollution in population centers, but it faces significant hurdles in utilizing its vast wind potential. As this analysis demonstrates, racing to install capacity is only one part of the process.

While wind power generators such as NextEra Energy and NRG Energy were able to more fully realize the potential of their investments once expensive transmission lines were constructed, the process took several years (and is still ongoing) and required much shorter distances to be traveled than the largest Chinese wind farms do today. The world desperately needs China to slash its carbon dioxide emissions, but it remains to be seen whether the country can achieve its ambitious renewable energy targets by 2020.