What: Toy giant Mattel (NASDAQ:MAT) saw its stock jump 22% higher during the month of April, according to S&P Capital IQ data. 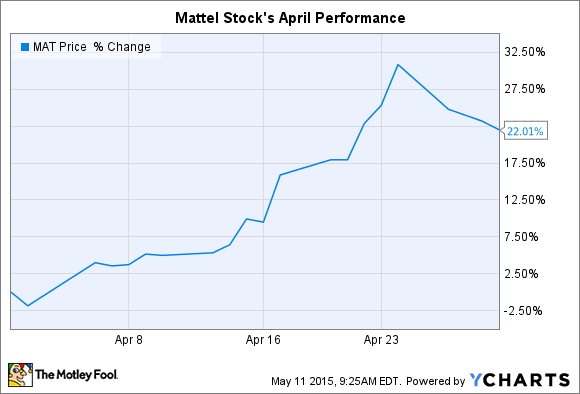 So what: Investors were pleased with the company's midmonth first-quarter earnings results, which included higher-than-expected sales and profits. Revenue rose 5% while adjusted operating loss was $0.08 per share, compared to the $0.09 that Wall Street was targeting.

Highlights of the quarter included 9% higher sales in Mattel's U.S. business, which was a significant turnaround from the 2% and 5% drops that the company booked in the fourth quarter and full-year 2014, respectively.

Key to that rebound was the fact that Mattel's Barbie brand returned to growth in the quarter after slumping for more than a year. Meanwhile, management's marketing and product innovation changes appear to be gathering momentum. "In the first quarter, we took a number of steps to implement a rapid turnaround at Mattel," CEO Christopher Sinclair explained in a press release. "While we still have a lot of work to do, we're starting to see progress," he said.

Now what: A big part of that work will involve replacing revenue from the loss of the Disney Princess licensing business to rival Hasbro. Mattel is aiming to fill that huge void with growing licensing partnerships with dozens of other companies. Those include an entertainment deal with Google's YouTube, movie agreements tied to the DC Comics and Ghostbusters franchises, and a link-up with Mojang, the creator of the popular Minecraft video game. "We have made a lot of progress bringing strategic partners online and you will continue to see us announce and bring truly amazing concepts to market in collaboration with partners," Sinclair told investors in a conference call last month.