Guru3D recently published an article about a slide that has been circulating on the Web for a while that talks about Intel's (NASDAQ:INTC) next generation processor family known as Skylake. You can see it below: 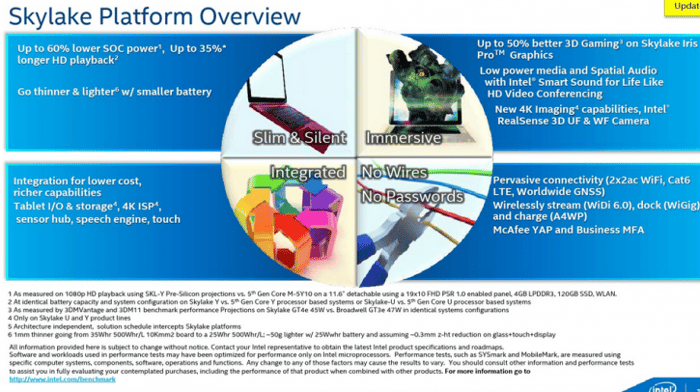 If you look carefully at these slides, you'll notice three very interesting features that Intel is bringing to Skylake that the company hadn't brought to previous generation processors.

Intel first introduced its Core M family of processors late last year. The first Core M chips were basically Ultrabook-oriented processors but mounted onto a slimmer processor package. The chips themselves though featured fundamentally the same level of integration as prior-generation Haswell processors.

With Skylake, it seems that Intel is upping the level of integration that it's bringing to its Ultrabook and premium tablet oriented Skylake-U and Skylake-Y chips, respectively.

According to this slide, Intel is integrating an image signal processor capable of processing 4K images, which should enable more robust (and more efficient) camera features, especially for detachable devices that can be used as traditional tablets.

To my knowledge, prior generation Intel Ultrabook processors did not include dedicated image signal processors.

A sensor hub, tablet I/O and storage
The slide also says that the Skylake-U and Skylake-Y chips feature both sensor hubs and tablet I/O. As you might recall, Intel's Merrifield, Moorefield, and more recently Cherry Trail processors all included integrated sensor hubs right on die. "Tablet I/O and storage," I believe, refers to the ability to support the same kinds of interfaces that are common on tablet processors.

Both of these features should help lower the system bill of materials required to build more tabletlike devices based on Core M.

One thing to keep in mind, though, is that unlike with the phone and tablet chips I mentioned earlier, Intel is unlikely to integrate the sensor hub or the "tablet I/O" directly onto the main processor/graphics die. Instead, I believe Intel is integrating these features into the platform controller hub or "PCH," that resides on the same package as the main processor die, as the slide below suggests. 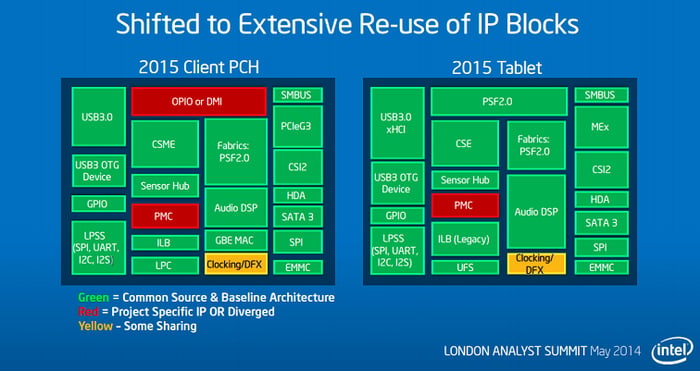 On the left is the Skylake PCH. On the right is Broxton. Source: Intel

Skylake should be a solid improvement from Broadwell
Skylake looks like a very solid advance in the PC market from Intel. For the low-power Skylake-Y and Skylake-U chips, Intel is delivering increased integration and features. At the higher end, Intel seems to be promising much better graphics performance and improved performance per watt.

The good news from an investment perspective is that Skylake should keep Intel firmly in the lead in the PC processor market. The bad news is that, no matter how good Skylake is, Intel's PC processor sales are more heavily affected by the health of the overall PC market rather than by how good its chips are for said market.