Please ensure Javascript is enabled for purposes of website accessibility
Log In Help Join The Motley Fool
Free Article Join Over 1 Million Premium Members And Get More In-Depth Stock Guidance and Research
By Tim Brugger - May 12, 2015 at 9:06PM

The search king’s click rates have been a source of consternation, but it turns out they may not matter.

Despite announcing yet another quarter of double-digit revenue growth in late April, Google (GOOG -3.47%) (GOOGL -3.30%) is still trying to claw its way back to pre-earnings stock price levels. Sure, spending on infrastructure and facilities took their toll on GAAP (including one-time items) earnings per share and operating margin, but those less-than-stellar results weren't the primary reasons for Google's share price drop.

The culprit, once again, was Google's continually declining cost-per-click (CPC) rates. As the king of search, Google generated a significant portion of last quarter's $17.26 billion in sales from users clicking on its search ads. However, as more and more prospective ad "clickers" access the Internet via their mobile devices -- spots Google's marketing partners simply won't pay as much for -- CPC rates are taking it on the chin.

If the fees for its main source of sales are dropping, how was Google able to grow revenues 12% last quarter? Turns out Google is steadily taking market share from its old mobile rival Apple (AAPL -2.98%) in a key area, and it could make concerns about CPC rates moot.

Winning the mobile Internet wars
It's no secret that Android is far and away the leader in mobile operating systems. One look at its global smartphone market share of over 80% -- Apple's iOS is second with about 15% -- is a testament to that. However, simply gaining mobile OS market share isn't enough. As recently as last year, Apple's bevy of iFans accounted for more mobile Internet usage than users of Android-run devices by a wide margin.

That sounds counter-intuitive considering it's been estimated there are more than 2 billion Android OS mobile devices, about four times that of iOS devices, yet for years iOS was the Internet access system of choice. That began to change over the past year, however, and in a big way -- and the impact on Google's search volume is plain to see.

That was then; this is now
About this time last year, approximately 52% of mobile web browsing around the globe was done using an Apple iOS device. An impressive figure, to be sure, particularly when you consider that all those Android mobile users accounted for a "mere" 38%. It's no wonder Google's CPC rates were nose-diving: 2 billion-plus devices or not, Android owners simply weren't using their devices in the same manner as Apple users. For Google to drive optimum revenue from its mobile devices, users need to access the web to click on ads.

Fast-forward to today and the mobile web access picture has flip-flopped. According to data from research firm NetMarketShare, as of last month the percentage of mobile usage has essentially reversed course, with just shy of 53% of Internet access on-the-go coming from Android users and about 39% from iOS devices. And the shift is likely paying dividends for Google in the form of paid clicks.

Last quarter may have resulted in a 13% decline in CPC rates on Google sites, but it also included a whopping 25% increase in the number of paid clicks. On an aggregate basis -- including both Google sites and its network partner's websites -- paid clicks jumped 13% while aggregate CPC rates dropped 7% in Q1 compared to 2014. Naturally, Google keeps specifics of how many paid clicks are mobile and how many are desktop-based private, but the huge jump in Android mobile usage almost certainly played an integral role. 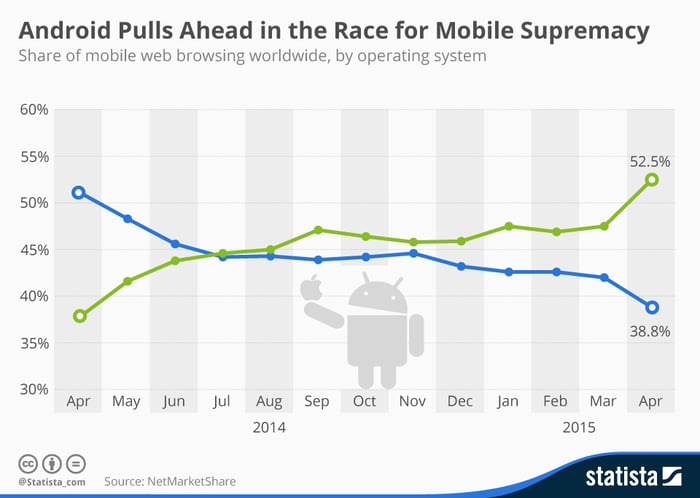 How'd they do that?
There are a couple of likely causes behind Google's dramatic improvement in web usage.

Improved, more web-friendly devices from Google's mobile manufacturing partners played a part in the dramatic transition. It's also likely that -- as CFO Patrick Pichette alluded to during Google's Q1 earnings call -- Google's "re-tooled mobile search engine" is beginning to pay dividends. If the mobile web usage trend continues, Google's Android could account for a similar percentage of online activity as its overall OS market share before long, rendering its falling CPC rates even more of a non-issue.

The $1.1 billion increase in operating expenses last quarter is something to keep an eye on, as is the increasing impact of YouTube's growth, something Pichette wouldn't provide specifics on (though the company did say it's growing and making up a bigger piece of Google's revenue pie). Great news. But those falling CPC rates? No need to worry: The increase in web usage volume puts that "problem" to bed.