Please ensure Javascript is enabled for purposes of website accessibility
Log In Help Join The Motley Fool
Free Article Join Over 1 Million Premium Members And Get More In-Depth Stock Guidance and Research
By Alex Dumortier, CFA - May 12, 2015 at 12:33PM

What's happening: Shares of American Public Education (APEI 0.00%) fell as much as 23% on Tuesday after the company announced first-quarter results that included guidance for the current quarter that fell short of Wall Street's expectations. Today's share price drop compounds what was already a testing year for APEI shareholders, with the stock having now lost two-fifths of its value year-to-date: 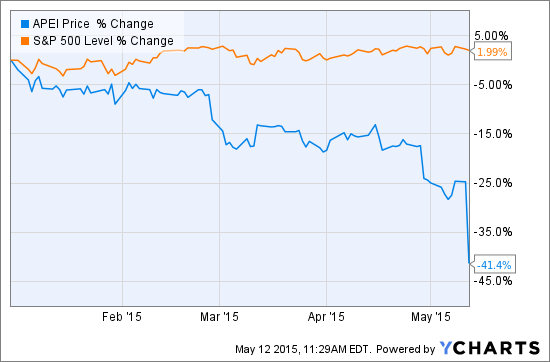 Why it's happening: Here's how the headline numbers from the earnings release shook out:

At first glance, the market appears to be overreacting. After all, APEI was essentially in line with the consensus estimate on revenues and actually produced a small "beat" on earnings per share. As far as earnings guidance goes, the range of $0.42 to $0.46 manages to include analysts' consensus estimate (even if it is the upper bound).

Revenue guidance for the current quarter appears to be the culprit here, with the company expecting a 7% year-on-year decline in revenues (the midpoint of the range) -- roughly twice the decline analysts were forecasting. That is unnerving in the context of a 3.5% year-on-year drop in revenues in the first quarter. In the current quarter, the company expects net course registrations in its American Public University System (APUS) to fall between 10% and 7%, with net course registrations by new students expected to drop even more sharply, at between 23% and 19%.

Management did try to highlight a silver lining in its earnings call presentation: New students using Federal Student Aid have higher GPAs than in the year-ago period and first course completion/ pass rates have increased, "which may lead to improved outcomes and future financial stability."

At eight times cash flow and less than 11 time forward earnings, per research firm Morningstar, shares of APEI sport a depressed valuation (certainly relative to the broad market), which suggests they may contain a margin of safety. However, that observation was already true prior to today's price decline. APEI is a business in transition, and they are often very difficult to handicap. With a small volume (the average value traded is roughly $3 million per day), the only thing that seems certain is that more volatility is in store for shareholders.

Two High-Growth Stocks to Put on Your Watchlist