The downturn in oil prices and growth in China has hurt a lot of companies, and even an industrial conglomerate like United Technologies Corporation (NYSE:RTX) can't be insulated from these factors.

First-quarter results showed just how much of an impact macro factors are having on the company. While some might be temporary, some are going to have a big effect on its strategic decisions going forward. Here are my five biggest takeaways from United Technologies' comments on its first-quarter conference call with analysts.

The sales growth number to watch

Organic sales grew 3% in the quarter, and that is on top of the 5% organic growth we saw in the same quarter last year. In the commercial businesses, we saw 6% growth in the Americas helped by the ongoing U.S. economic recovery.
-- Akhil Johri, SVP & CFO

The headline numbers weren't great for United Technologies, with revenue down 1% from a year ago. But currency had a lot to do with that, and organically the company grew at a steady 3% clip.

What's also important is where that growth came from within the company's business segments, and where struggles occurred. In building and industrials, the Americas and Asia both grew at 6%, although EMEA was up just 1%. Aerospace wasn't quite as strong, as the next quote shows.

What to do with Sikorsky?

On the aerospace side, defense sales were flattish and commercial grew by 3%, with aftermarket growth of 2% at Pratt and 4% at UTC Aerospace Systems. Sikorsky's commercial business was down 26% as lower oil prices negatively affected demand for helicopters and aftermarket in the oil and gas segment.
-- Johri

Sikorsky has been an unstable business for United Technologies, and management is trying to figure out what the right strategic move is for the business. Potential sale or spinoff rumors have floated around for more than a year, and now we're seeing the financial reason.

Not only are military orders weak at the moment, a sharp decline in oil and gas drilling has led to a drop in commercial orders. The pain from the drop in oil prices is spreading well beyond drillers themselves.

China's not having the best year

Otis equipment orders were down 12% in the quarter. Now Q1 is our most difficult to compare there, but construction activity in China has clearly been slowing.
-- Johri

I took note of this quote not because of Otis' orders, which can be volatile quarter to quarter, but instead because this is another data point indicating that China's economy is slowing. One major concern for markets today is that China's economy could begin slowing or even go into a recession, and one of the first places that would show up is in building products. Keep an eye on China's growth and infrastructure spending in coming quarters.

For the year, based on anticipated improvements in the commercial aftermarket, we continue to expect profit growth of $225 million to $275 million on mid-single-digit sales growth at UTC Aerospace Systems.
-- Paul Lundstrom, director of investor relations

Military aircraft and helicopter demand is down, but commercial aviation is hot right now. That's why management expects profit to grow at a midpoint range of $250 million in UTC Aerospace Systems. This is arguably United Technologies' most important unit at the moment, with Otis, Carrier, and Pratt & Whitney all facing macro challenges in their end markets. Keep an eye on the performance of this unit in future quarters because it could be a key driver of growth in 2015.

Share repurchase was $3 billion including the benefit from the accelerated stock repurchase that we announced last month. So we are pretty much done with the share buybacks placeholder for this year. We are maintaining our placeholder of $1 million for M&A and continue to expect free cash flow to net income of 90% to 100% in 2015.
-- Johri

United Technologies isn't really a growth stock, but it's giving the cash it generates back to shareholders. You can see below that shares outstanding have declined 11% in the past decade, while dividends paid have tripled. 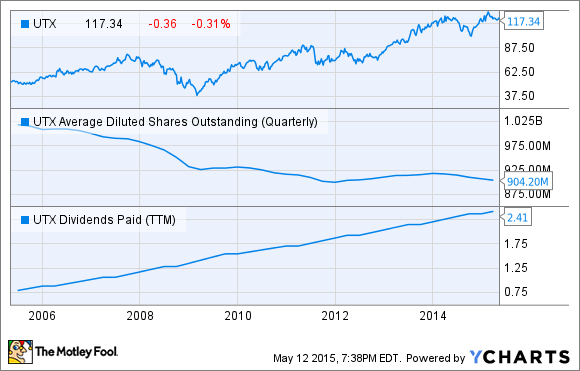 This is a slow-and-steady way for investors to gain value in a company that is reliably profitable year after year. Investing in United Technologies may not be as exciting as investing in tech stocks, but with money being returned to shareholders in the form of dividends and share buybacks, it will make it easier to sleep at night.

Slow growth but solid returns
United Technologies is struggling with some macro factors that are out of its control, but it's growing organic sales at 3% and earnings per share by 7% on an adjusted basis. This is what investors should want to see given the economic backdrop. This is a strong cash flow business that investors can buy and hold for years to come and still sleep well at night.