Please ensure Javascript is enabled for purposes of website accessibility
Log In Help Join The Motley Fool
Free Article
Join Nearly 1 Million Premium Members And Get More In-Depth Stock Guidance and Research
By George Budwell – May 13, 2015 at 9:04AM

Pfizer and GlaxoSmithKline are two names that generate a lot of interest among income investors. But which stock offers the best prospects for income-seeking investors over the long term?

Dividend stocks are undoubtedly powerful investing vehicles that can greatly amplify gains over a long period of time. That said, it's no easy feat to pick the right dividend stocks for your portfolio.

Within the healthcare sector, Pfizer (PFE -0.63%) and GlaxoSmithKline (GSK -0.85%) are two popular dividend stocks because they have strong brands and a long history of paying out dividends, and they dole out a higher-than-average yield. Let's consider which stock offers the better long-term opportunity moving forward.

Pfizer's turnaround story is starting to kick into high gear
The loss of former top-selling drugs such as Lipitor has been an albatross around the big pharma's neck for some time now. In the first quarter of 2015, for example, total revenue dropped by 4% year over year, mainly because of falling sales from established products. As a result, the company's share price has markedly underperformed its peers over the past decade: 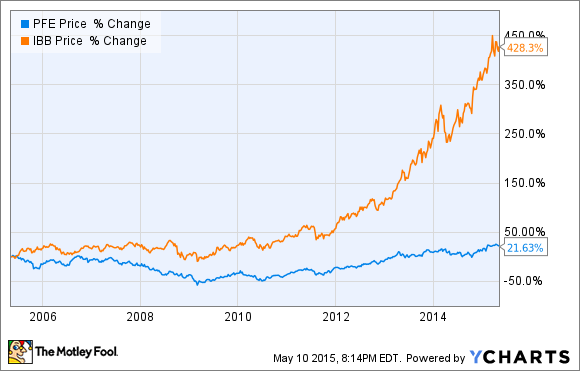 However, the drugmaker is starting to see the light at the end of the tunnel. New indications opening up for its blockbuster pneumonia vaccine, Prevnar 13, and the recent approval for its breast cancer drug Ibrance, have been generating strong organic growth within the company's innovative products business.

Pfizer has also been busy building out a highly competitive immuno-oncology platform with its partner Merck KGaA that might lead to major new product approvals by as early as 2017.

The key, though, is going to be how management plans to stem the tide of mounting losses in its global established products business, where sales dropped by another 10% in the first quarter of this year.

By all accounts, the recent Hospira acquisition appears to be the answer. Hospira should help Pfizer grab a large portion of the multibillion-dollar biosimilar space heading into 2020. In short, this buyout won't result in a quick fix, so to speak, but it should help return this segment to growth within the next five years.

On the dividend front, Pfizer remains a top performer, paying out $1.8 billion in the first quarter, for a 3.2% yield at current levels. With strong and growing cash flows, Pfizer has a sustainable yield, unless it decides to engage in another massive takeover attempt akin to its failed offer for AstraZeneca.

Glaxo is bogged down by questions over its leadership and vision
Meanwhile, Glaxo is undergoing a crisis of confidence in the company's senior leadership, especially in CEO Andrew Witty. Under Witty's stewardship, the company's share price has basically traded sideways: 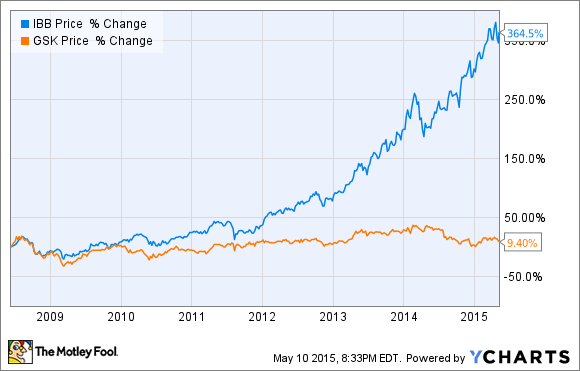 The loss of exclusivity for its flagship respiratory medicine Advair, and the inability to develop any new major products on its own in the interim, has caused the company's diluted earnings per share to drop by 12% on average for the past five years running. As a result, Glaxo's share price has dipped 13% over the past year, culminating in a monstrous dividend yield of 6.14% -- the dividend has remained stable while the share price has fallen.

The biggest problem, though, is that Glaxo doesn't have a compelling vision going forward, leading to calls for Witty's resignation. While most of its peers have pushed deeper into oncology, for example, Glaxo decided to exit this high-growth market in favor of vaccines. Given that vaccines tend to have much lower profit margins and shorter shelf lives than cancer-fighting medicines, this move hasn't exactly impressed the market.

Glaxo has also shied away from spending its cash on a major acquisition to restart its growth engine. In short, the company's huge dividend looks great, but this cash would probably be put to better use through an acquisition, as evidenced by the power of the "growth by acquisition" strategy that several other drugmakers are employing.

Should income investors favor Pfizer or Glaxo moving forward?
I think Pfizer wins this matchup hands down. Even though Glaxo offers a much richer yield, the company's growth prospects, and hence its cash flows, look suspect over the long haul. Pfizer, by contrast, looks like a company ready to break out because of its multitude of value-creating products and clinical pipeline candidates.