SandRidge Energy Inc chips away at its debt by swapping $40 million of it for equity.

What: Shares of SandRidge Energy Inc (NYSE: SD) were slammed down more than 10% in afternoon trading on Thursday. This was after the mid-continent driller disclosed that it had exchanged equity with one of its bondholders to reduce its debt.

So what: As part of the exchange, SandRidge Energy issued a bondholder about 16 million shares in exchange for $29 million of the company's 7.5% senior notes due in 2021 as well as another 257,000 additional shares as interest. It also exchanged about 11.6 million shares for $21 million worth of its 8.125% senior notes due in 2022 along with another 107,000 shares as interest. In total, the company is eliminating about $40 million of its debt with this exchange. However, this is just a drop in the bucket: 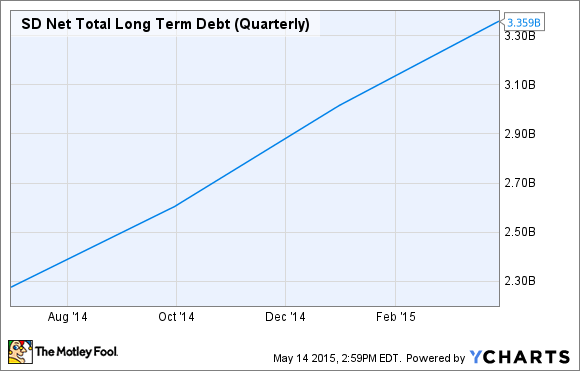 In addition to the fact that the exchange really doesn't address the company's debt issue, the exchange rate implies a $1.80 share price for SandRidge's stock, which is a premium to its recent stock price. Suffice it to say, investors aren't pleased with this move, as the company has been burning through cash to drill less economical wells when it could have used that cash to pare down debt.

Now what: While this move will reduce the company's cash interest expense in the future, it doesn't even begin to address its overall debt problem. That problem isn't getting any better, as the company burned through all of its cash last quarter and is expected to outspend its cash flow in 2015 based on its capex plan. This is resulting in the company borrowing on its credit facility, which is something it can't do forever. Suffice it to say, SandRidge needs to do more than exchange a slug of its equity to pay off a paltry amount of debt.