The price of natural gas in the U.S. can be insanely volatile. A particularly bad winter or worries of a shortage can cause the price to spike. On the other hand, overabundance can lead to a dramatically lower natural gas price. The shift from too much gas to fears of not having enough, or vice versa, can lead to a sudden change in price, which the following chart shows has happened all too often over the past two decades. 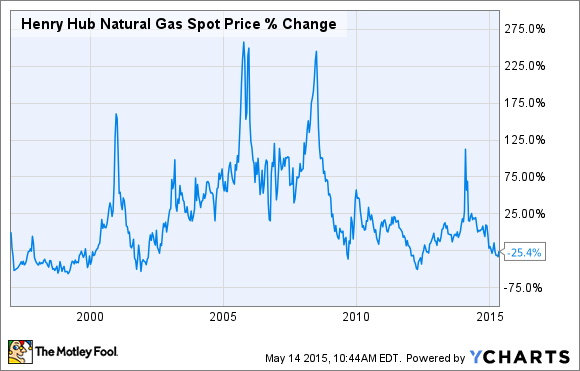 This volatility can make it tough to profit from the actual production of natural gas as the profits of producers ebbs and flows along with prices. Furthermore, these producers must spend a good portion of those profits developing new reserves to replace declining production. This is why investors looking for a safe way to play natural gas are better off avoiding pure-play producers. Instead, there are much safer, less volatile ways to profit from the commodity. Here are three safe investments in the industry.

Energy infrastructure powerhouse Kinder Morgan is the third-largest energy company in North America and the top energy midstream company. It has a diverse set of assets, but its bread-and-butter business is natural gas pipelines, which provide about 54% of the company's earnings. These earnings are fueled by the largest natural gas network in North America -- Kinder Morgan owns an interest in and operates 69,000 miles of natural gas pipelines. The company makes its money by leasing out pipeline capacity to natural gas producers, which pay a fee for this capacity. This fee-based business model cares nothing for the price of gas at the moment, which virtually eliminates price volatility.

Kinder Morgan's pipelines are connected to every major U.S. natural gas resource play, which has it well positioned for the natural gas megatrend. As the slide below shows, both production and demand for natural gas in America are expected to grow in the years ahead. 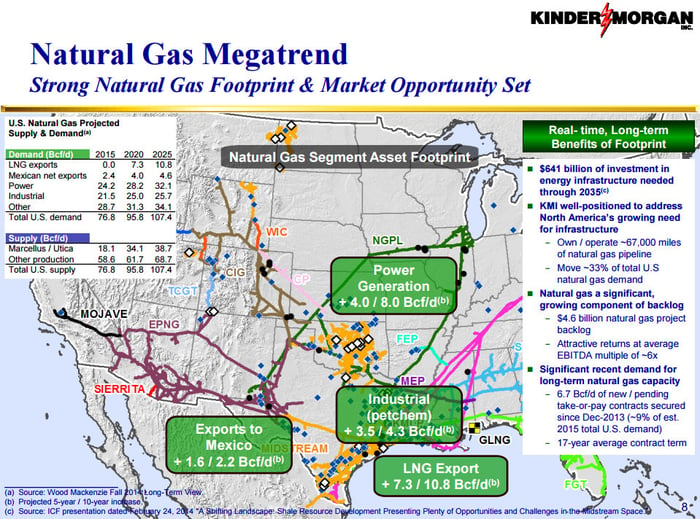 This trend will drive Kinder Morgan's growth in the years ahead. In fact, the company currently has a contract backlog totaling just over $18 billion, with a large portion of that growth coming from its natural gas pipeline segment.

2. Williams Companies (NYSE:WMB)
Like Kinder Morgan, Williams is a large natural gas-focused energy infrastructure company. Combined with its master limited partnership subsidiary, Williams Partners (NYSE: WPZ), which the company recently announced it was bringing in-house, it is the fourth-largest energy midstream company in North America. A large portion of Williams' business is focused on natural gas -- about 30% of U.S. natural gas volumes touch its vast system each and every day, which brings in primarily fee-based revenue.

Williams sees that fee-based revenue growing substantially in the years ahead as it plans to spend upward of $30 billion on growth projects that could come online through the end of the decade. Again, since these are primarily fee-based projects they will provide safe growth for the company.

3. Cheniere Energy (NYSEMKT:LNG)
Cheniere Energy is also an energy midstream company, but its focus is solely on natural gas exports. The company is building two liquefied natural gas, or LNG, export facilities along the U.S. Gulf Coast, with the first phase scheduled to start pouring in fee-based revenue later this year. By the end of this decade the company expects to have invested over $30 billion to build nine LNG liquefaction trains.

The majority of Cheniere Energy's future export capacity has been signed up through take-or-pay contracts, which locks in its margins. This is expected to yield significant future cash flow for Cheniere once all of its trains come online. This makes Cheniere Energy a unique way to profit from natural gas growth as its fee-based cash flow should skyrocket by the end of the decade if everything goes according to plan.

Investor takeaway
Natural gas prices are notoriously volatile. If you're intent on investing in the industry, infrastructure companies are a much safer alternative to the producers. These companies own fee-based assets that make money no matter the price of natural gas, which mitigates much of the volatility.